Often times images that are used in books vary in size from page to page. For basic books with one image box followed by a text box on each page, often the image box on each page needs to be rescaled manually in order to ensure that each image is top aligned. I wonder if it might be possible to add a button to the image box that one could simply click to force the image box dimensions to equal those of the provided image. This would speed up the process for the Bloom user and would help ensure that the image box is fully filled vertically and horizontally. Thank you for considering this request.

Hi Chris,
I’m not clear about how this would work, but I am clear that we should have a top-alignment option on images, and that the image-above-text page should use it. Agree?

Thanks, John. There may be cases where users do not want to top-align an image above a text box, so it should probably be an option rather than forced. If optional, you could offer top, center, bottom alignment choices. I suppose there could be left, center, right horizontal alignment options as well.

The problem with having a button to top align images without changing the size of the container is that then there is unwanted white space at the bottom of the container that will still have to be dealt with if one wants consistent spacing between all image containers and text boxes throughout a book.

Of course, it is relatively easy to eyeball the height of an image container, but it would be nice to not have to drag the image container size up and down until it looks just right.

On a separate note, I’ve sometimes wished that I could manually enter the percentage rather than try to drag the bottom of the image up and down until I get it to where I think the image completely fills the container vertically.

Not sure if this is what is wanted, but it would be possible to make a page with a top image that is automatically full width and as high as it needs to be to preserve the aspect ratio, leaving the rest of the space to the text. In principle it’s possible to make a button to do that, too, but it’s not obvious what it would do in more complex page layouts. Perhaps it only shows up in layouts with exactly one image/text split? 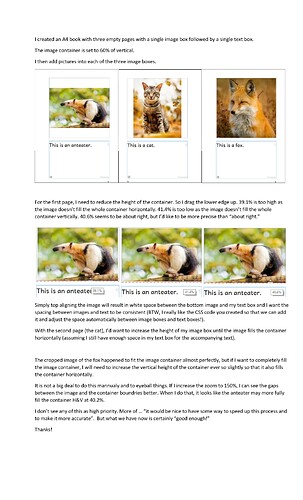 I’d like to have that splitter control “snap” to the right spot when in the range of matching the proportions of the image.

John H - you said in one word exactly what I was trying to communicate with so many!

While I was in the Philippines, I watched authors struggle to adjust the image container sizes. They did so with varying degrees of care and precision. Maybe one solution would be to be able to somehow click open a box that would allow the user to enter a specific percentage. There is a box that pops up briefly that shows the percentage, but what if that box could be opened and a specific percentage 59.2% or 60.0%, for example, could be typed in)?

For our UNICEF books, I tried to pay particular care, whenever possible to the size of images on pages that faced each other. This helps to ensure that the images and text alignment on facing pages when a printed book is opened are consistent. This isn’t always possible to do given the amount of text on a particular page and the dimensions and content of particular images, but I think books look more professional when images at least on facing pages are consistently sized and text starts at the same point on the page.

What “snap points” do we need? Here are the ones that occur to me:

What I think would be most helpful is for the user to be able to type in the exact % that he/she wants. For the books we were making for UNICEF, there was a lot of inconsistency in the size of the often handmade images. Since the pages of the books consisted of just an image box followed by a text box, as often as possible we wanted the image boxes to be the same size on facing pages so that the text on each page would be vertically aligned with the text on the neighboring page. There were times when that was not possible (usually because one page had too much text), so we made exceptions.

In an RTI workshop, I watched users try to scale their images to a specific % on all pages (it often just looks a lot better if all the images are the same dimension). They would get frustrated and eventually give up. They are all working on laptops, many with poor resolution screens. It is good to know that one can zoom the screen and have better success, but it would be nice if they could just type in the percentage that they want and not have to try to scale the image manually.

Yeah, Bloom is full of things that don’t work explicitly like other programs, and that is a big part of its success. So before we complicate the program with a visible way to enter a number, or make the program more mysterious with a hidden way, humor me. Help me see if we can remove the need for this through something simple, fast, and intuitive.

Perhaps here is where “dots” might be easier to understand than % of the page? John, your zoomed parrot is a great idea. It reminds me of the Facebook cover photo function, where a photo auto-fills the horizontal dimension, and the user can drag the image to display the best vertical portion of the pic (once you realize this is possible it’s easy to do). Bloom would need more complexity, of course, but the ability to choose between “fill horizontal/vertical” would be a great addition towards making eye-catching, professional books.

I recognize all that’s mentioned here. We too, are often trying to get all the pages in the book to have a divider set to the same % as the other pages.

If the snap behavior could accommodate for that, that would be great.

We’ve made splitters smart in a couple of ways: 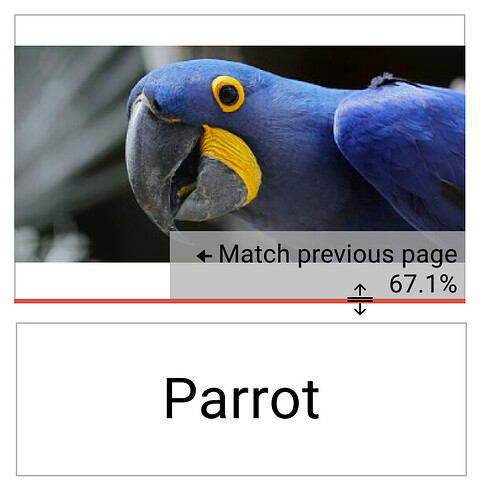 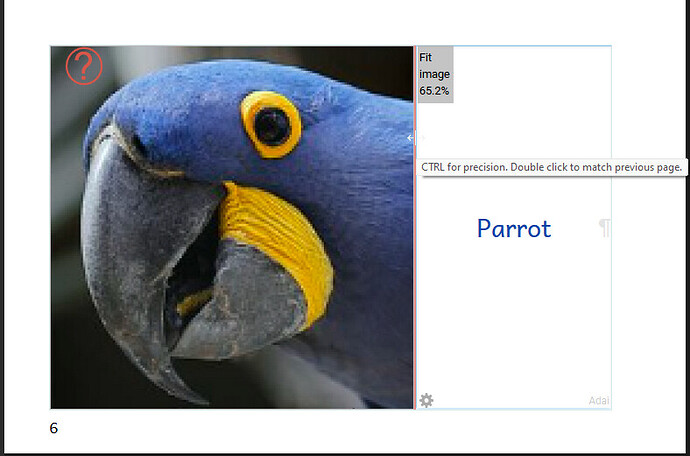 Please try this out when this lands in the beta and give us feedback:

Are there other “split points” that you’d like to see?

Is the “attraction” of the split points too strong? Too weak?

often the image box on each page needs to be rescaled manually in order to ensure that each image is top aligned.

So is assigning the “Double Click” to “Match previous page” ideal? Or should we instead make it “Fit image”? I’m not clear which is more common, and went with “matching previous page” just because it turns out to be easy to drag until you snap on the “fit image” point because the image itself is guiding you, whereas the “match previous” page relies on you having some memory of what you’re aiming for.

Thanks everybody for the feedback!

I look forward to testing this out. Thanks. I just updated my Bloom Beta and it seems like it doesn’t yet incude these changes yet. @JohnHatton

It isn’t in the beta yet. Nor alpha actually.
Still in review and testing.
We’ll try to post here when it makes it to beta.