Right now you have an “Export to word” feature. Would it be possible to make that Export to a Txt file such that it would be more readily usable as a sample text in the decodable book tool (and also usable in Primer Prep software). Especially helpful would be removing other languages from the sample text.

Currently, in order to feed the BLOOM books back into BLOOM as sample texts it’s quite an onerous process. We are taking finished books, exporting them to word dochen making a text file from that, then removing all of the other languages attached to that book from the text file (that’s the most troublesome part), then using those as sample texts in PrimerPrep and the DecodableBook Tool.

Hi Beth,
Bloom 5.1 Alpha has an Export to Spreadsheet command. Each language comes out in its own column: 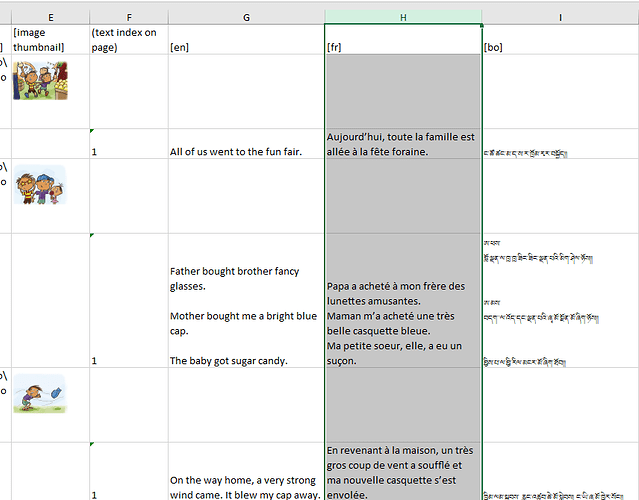 So you will be able to just select a column corresponding to the language you want, copy it, and paste it into your text file.

This feature is still being polished, but it works. So if you have a need for this right away, you could use the alpha to do it. Just don’t use the alpha for any other work, because there are many half-baked things in there. Bloom 5.1 Alpha can be installed alongside normal Bloom or Bloom beta. See https://bloomlibrary.org/page/create/downloads.