I am preparing to file a bug report and I come here just to upload two screen shots with hints.

Still, if any user here knows a workaround or why this is not a bug but a feature, please shout.

I want to realize the concept where each language (normally out of two) is showing in its own colour:
The national language a dark blue (BLO in my example)
The “analysis” language a deep red (French in my examples)

There is one style called
ui.list-item-subtitle-blo
which is being used for both lists, although it should only be used in one of the lists

There is another style available called
ui.list-item-subtitle-fr
which is (bug) not being used at all

Now I do not know the logic of the naming:
Either list-item-subtitle-fr could mean “a BLO preview in the French list” or
it could mean “a French preview in the BLO list”.
Both naming conventions would be valid, although I would prefer that “fr” means it is actually showing French words.

But something went wrong, one style is being applied twice and the other is not being used. Sorry, here in West Africa we say everything twice. Twice. This is blocking me from using the proven method of “one colour per language”; so I would consider this “urgent” unless somebody finds a workaround. 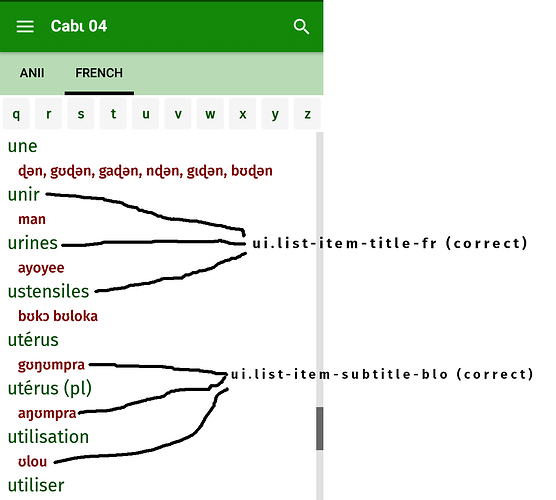 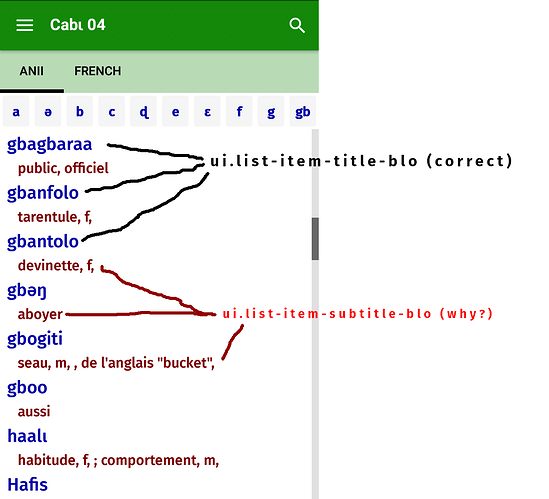 Note: Yes, I am aware that these colours are ghastly. I used them yesterday when spending a lot of time, searching for my missing style-assignment “French preview in a BLO list”. Later the app will look clearer and less Kindergarden.

Our support page is not sending message last I checked but try it. If you don’t hear back by Monday let me know.

Thank you @Ian_McQuay. If I got this entirely wrong (would not be the first time), then of course I would appreciate receiving a message.

But mainly I want to help and to report issues, to encourage the team and to have an ever more awesome tool and output.

I can give a shout next week if no answer at all. And still hoping that some other user will show me my brain-twist or how to fix it via CSS. I am not afraid to edit CSS files, but each edit-generate_app-test cycle takes so much time, would prefer to have more documentation rather than just trying to figure the workings out by myself.