I’m trying to install Keyman Developer 14.0.270, over the top of version 14.0.235 beta. It gave me various warnings about a restart needed, and I said that was OK. (True confessions: I did have quite a few things open, that I wanted to shut down on my own time frame first…) It made it all the way to the “Completed the Keyman Developer 14.0 Setup Wizard” which says “Click the Finish button to exit the Setup Wizard.” I can’t remember if I clicked the Finish button or not, but there is an error that now pops up: 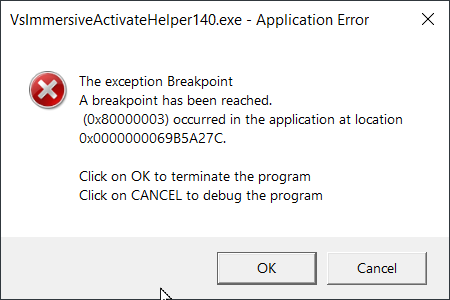 I was eventually able to close the Keyman Developer installer, but that error message is still popping up. I need to work towards my restart now, which should make it go away, but I thought I’d let you know.

Just FYI - I shut everything down, and just before restarting I clicked OK and Cancel a bunch more times on the error dialog. At one point the .exe giving the error was Firefox\sendping.exe (or something like that - by that point I couldn’t capture and save a screen shot). Then I shut down and restarted.

Anyway, in spite of the difficulties, it looks like Keyman Developer was installed correctly, and Keyman very kindly let me know that there was an update. It was still at 14.0.249, or something like that, so I had apparently updated it after the .235 beta. I had already downloaded the Keyman update installer, so I ran that and things seem to be running properly now.

Yeah, this is why the installer asks you to restart before continuing – what has happened here is that Windows Installer has replaced part of Keyman Engine while it was still loaded in memory. This causes the apps that have the Keyman Engine library loaded (which is pretty much every app due to the way Windows hooks work) to crash badly as you experienced.

It’s a frustrating problem! We have plans in 15.0 or subsequent versions to (a) remove Keyman Engine entirely from Keyman Developer (the debugger currently depends on it), and (b) change the update mechanism to run automatically after Windows starts, before Keyman has started, so these kinds of problems can be avoided. But there are a few wrinkles to sort out on the way, of course.