How do we remove a Bloom book from the Bloom App on Android?

I was asked how to remove an book from the bloom app and was not able to figure it out. How do you delete or remove a book? I tried long pressing the book on the front, but that did not seem to do anything.

“Long-press” on book on home screen, then the trash can should appear at the top of screen. 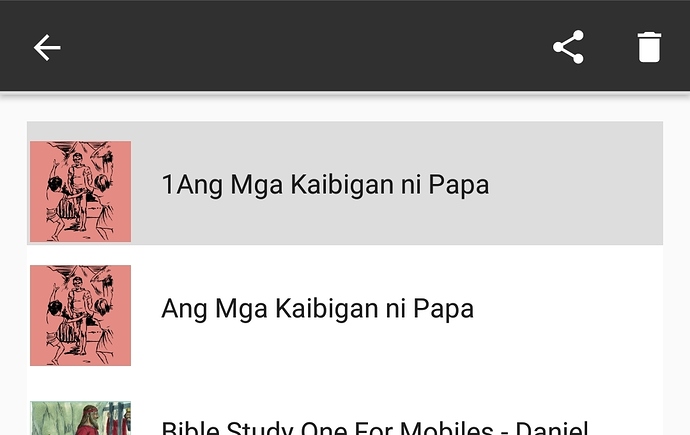 Thanks, that works on my phone a Moto with Android 7.1.1 but on another guys phone, a Samsung Galaxy 8 with Android 8, the long press does not bring up the trashcan. It just opens the book.

Another option is to open the File Manager on the phone, find the .bloomd file (e.g. within \ Bloom) and delete it. Restart Bloom reader and the book should be gone.

Thanks for that info, @Scott_Dysart.
I’ll create an issue to research what the issue could be.

Hello Andrew,
I’ve not seen Android 8 before, but this guys phone didn’t look like any Android I’ve seen. I would expect there to be some changes along the way, but the change was so significant that I couldn’t find my way around the phone (it’s displaying a different language). It maybe some custom install based on Android 8.

Turns out that the guy had somehow set his long press time on his phone to some impossibly long time, so when we held the long press for a normal long press, the phone considered it to be a regular press.

We’ve set it to a more sensible time and it works normal. Simple solutions are the best solutions.