Currently, nobody has created a Keyman keyboard for Gunjala Gondi.

Keyman Developer 10 fully supports Unicode 11.0, so you can use Keyman Developer to create a keyboard that will generate the characters in the Gunjala Gondi Unicode block [U+11D60 to U+11DA9] 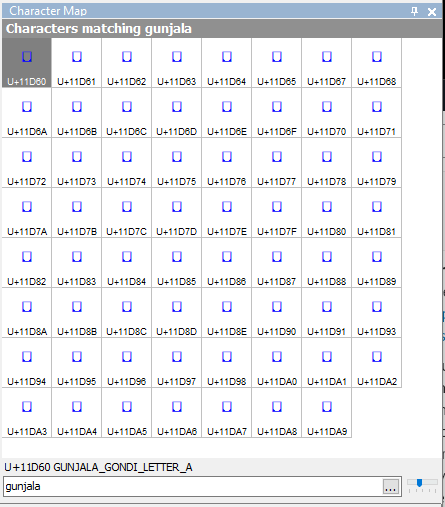 You’ll also need a font that renders the Gunjala Gondi characters (which I don’t have). That’s why I get the square boxes in my screenshot.

I’ve read about a Gunjala Gondi Lipi Font that was developed at a University, But I don’t know where one could get it.

Thanks for reply
I know about university in india

Hi Karambir Singh, Yes, the University of Hyderabad is in the process of releasing the (pre-Unicode 11) font to be publicly accessible under the Open Font License, but there have been some unexpected delays in the formalities for doing so. Once that has been done, SIL hopes to assist in converting that font from the DEV (and PUA) codepoints to the proper Unicode 11 assigned codepoints. And a Keyman keyboard will also be designed for the same. Best regards, Mark