There is a a longstanding need to allow people to easily find the “quality” books (whatever that means in your context). This has been discussed here: Add a "recommended" status

Recently I’ve been thinking about using Pinterest for this, and would like feedback from the community. Here is my experimental Pinterest board of Bloom books. Imagine if we could get members of the Bloom community to manage boards like that (Pinterest allows multiple people to co-manage board).

Here’s how it would work, from the perspective of the curators:

We would provide a button to easily “pin” a book. “Pinning” a would save the book cover and name, along with the url, to your Pinterest account. In this mockup the Pinterest button is in the upper right: 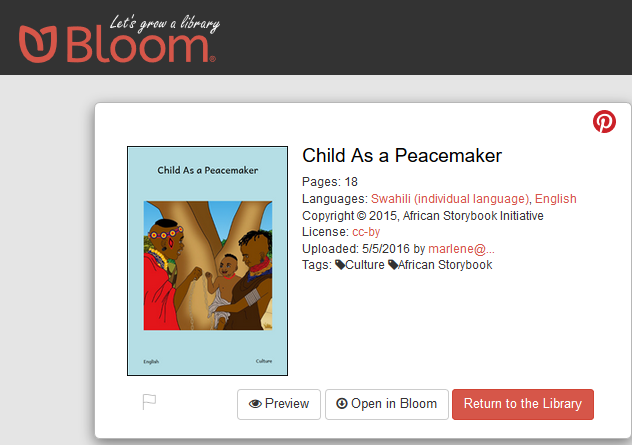 So as a curator, you would go through BloomLibrary, selecting books and adding them to your board. You can also choose a “Section” of your board in which to put the link to the book. You could then publish the url to your board where ever you like. BloomLibrary.org could also feature a list of these boards prominently, so that people find out about them.

These Pinterest boards could be “owned” by their curators or, if we want, Bloom itself could have a Pinterest account that “owns” the boards, and we would then just give curation permission to people who want to help out with them. 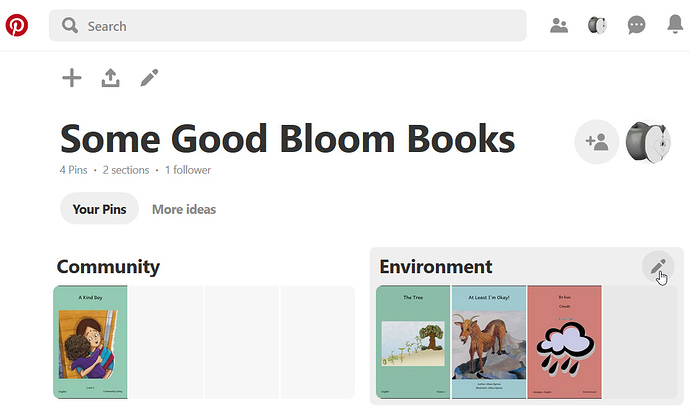 A user might find out about your board via any number of channels, including just seeing it listed when they visit the Bloom Library. They would not need a Pinterest account. Clicking on the link to your board, they would see something like this: 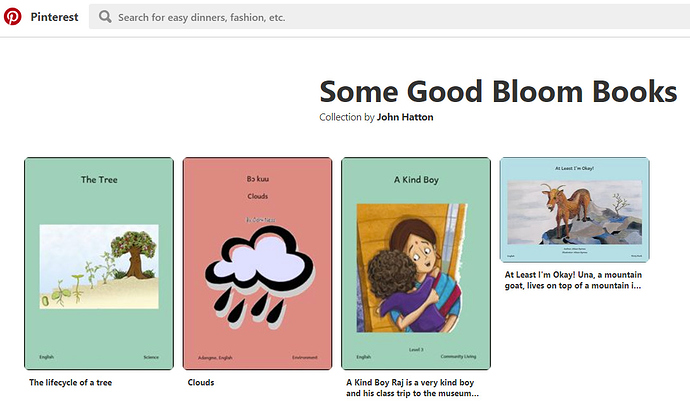 Clicking on these covers, the user can get back to Bloom Library and read or download the book.

To experiment with making your own list of Bloom books:

What do you think?

Is this a good way to go for meeting our curation need? A big win for us, the developers, is that we get to leverage all that is in Pinterest with very little programming/maintenance effort. The obvious downside is that users will be bugged by Pinterest to create an account, and may be shown some advertisements. What do you think?

Interesting idea John. I think it would solve some of my problems with finding good books in Bloom and with making collections of good books easily accessible: e.g. a collection of Good quality ESL books at Level 1, 2 and 3. And, as you say, using Pinterest would mean a lot less programming effort for you guys. The downside is not that you will be bugged by P to create an account, that’s no problem. But the 2 or 3 nuisance emails daily from then on are a downside. (Which I manage by deleting a bulk lot of them every week or so.) I also wonder if using Pinterest still requires the user to have fairly good and cheap internet connections (length of time to see stuff on it.)

If curators (and uploaders) are found to have good ‘taste’ in what makes a good book they could also be asked to help curate the Bloom collection - give star ratings to books or to weed out books that really shouldn’t be there or improve the concepts of some books - e.g. your chosen book on clouds could do with quite some improvement!

(I know you will say that literacy consultants will vary widely on the matter of what makes a good book! But I do believe there are some common points of agreement as mentioned in the discussion on recommended status and other points which can inform the discussion that can be drawn from current education/literacy theory.)

The faster preview problem still needs to be addressed though - the Tree book you used took an age to download the preview and I nearly gave up. It is by the way a good book, but could do with some editing to improve it in places – unless it is a song as well, but it doesn’t seem to be. But the authors give permission for adjusting it so that’s all good.

I will keep thinking on these things and if I get time to try something out in Pinterest will do so but not for a while, unless it is urgent that I do so.

Thanks for continuing to nag this issue and think of solutions.
Glenys

@Glenys thanks for the feedback.

But the 2 or 3 nuisance emails daily from then on are a downside. 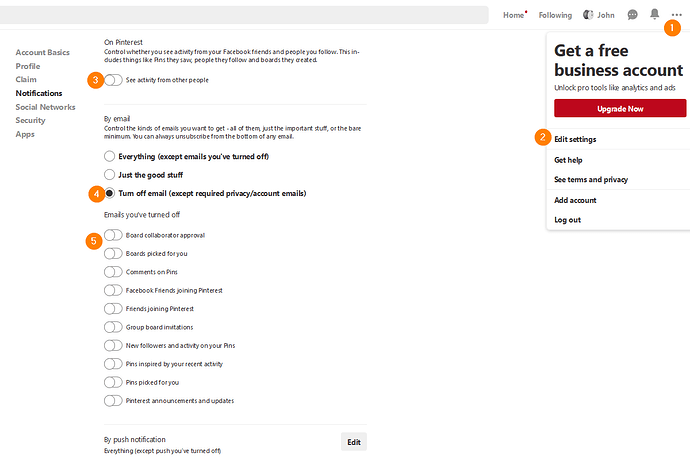 I know you will say that literacy consultants will vary widely on the matter of what makes a good book!

It’s not so much that… rather, when I resist calls for a Single Source of Goodness, it’s more that I know that this will be followed by a calls for other lists, based on other criteria. E.g. “all those good books require color printing, which is crazy expensive in my country. Can we have another list of books done with line art?” etc. So I’m just looking for one framework that will solve most needs.

The faster preview problem still needs to be addressed though

Yes! We hope to shortly replace the PDF previews with a book reader, and that reader will use only screen-resolution images, and (probably) only load one or two pages at a time.

Sure, and that can happen now. If anyone wants to volunteer…

I’m a regular Pinterest user, but my initial reaction to this idea was negative because I didn’t want to add another system to the Bloom experience, and I assumed it would be better to somehow integrate collections into Bloom. As I was thinking about it, though, I realized that there are infinite combinations of collections that people might want, and that would be hard to manage. There’s also really no way to have an “approved” status, because it entirely depends on who is doing the approving.

Wanting to keep an open mind, I tested the process by logging in, creating a board for Swahili books, along with sections for basic, intermediate, and advanced books, took a deep breath, and started trying to add content. Using a Pinterest plug-in in Safari, I was able to easily pin a link to a Bloom book, complete with a thumbnail. So in terms of process, for people who already have Pinterest accounts and Pinterest plug-ins, the process is straightforward. I won’t go back to the point that not everybody already uses Pinterest, as John and Glenys have both mentioned it.

The biggest advantage that I see is the ability to create collections of books from different platforms. I was able to pin Swahili books from the African Storybook Project, Storyweaver, Bloomlibrary, and the Global Digital Library in the same place. This helps with a problem that I often encounter, of having to write down 3-4 different resources for people that want to find books in their language. Instead, people could curate collections of books in their languages in one place. It’s still a problem of how to find those books, and whether people will want to do it, but at least it serves as a mechanism for aggregating materials.

To offer my two cents, I think using Pinterest for curation is one way of dealing with educators’ desire for collections, and I don’t see any problem with trying it, as long as adding the Pinterest button isn’t too difficult for you. It’s a fun idea, especially for people in the diaspora who are eager to find materials in their language for their children, and with our forays into multilingualism and urbanization, I think we need to start thinking about those communities. I was also concerned that Pinterest wouldn’t be localized into gateway languages, but the interface is available in more languages than the Bloom website currently is. (No criticism, just wanted to mention it.)

I’m not sure how well Pinterest will work among groups with lower digital literacy, lower bandwidth, and people who hate signing up for things. It could still be worth exploring creating some collections within the website, as African Storybook Project and Storyweaver have already done.

Keep me posted on how this is going!

@JohnHatton, could you correct the double R in the title of this thread to a single R?

could you correct the double R in the title of this thread to a single R?