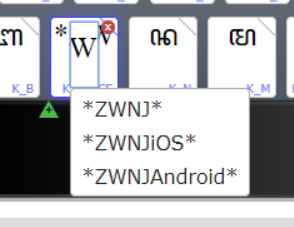 Also, I found out *ZNWJ* produces this symbol in the touch layout

That symbol is used in the touch layout font that comes in the mobile app. In order to have that symbol available for the OSK, the font you choose would need to have that symbol (which most will not). In that case you could use a graphic. Make sure to commit your graphic into the PR so it’s available.

The *ZWSP* was a mistake when I was preparing the keyman.com/14 webpage. I corrected it a while ago to *ZWNJ* but I’m surprised you are still seeing it.

Sadly, the OSK has not received the same love as the touch keyboard in version 14, so it does not support these custom symbols at this point. Am I allowed to say “it’s on the roadmap”?

You forgot to change it in Features | Keyman Developer 14.0

Hi,
I am still wondering what that key actually does.
Tanks.

The zero-width non-joiner (ZWNJ) is a non-printing character used in the computerization of writing systems that make use of ligatures. When placed between two characters that would otherwise be connected into a ligature, a ZWNJ causes them to be printed in their final and initial forms, respectively. This is also an effect of a space character, but a ZWNJ is used when it is desirable to keep the words closer together or to connect a word with its morpheme. The ZWNJ is encoded in Unicode as .mw-...

The zero-width space (​), abbreviated ZWSP, is a non-printing character used in computerized typesetting to indicate word boundaries to text processing systems when using scripts that do not use explicit spacing, or after characters (such as the slash) that are not followed by a visible space but after which there may nevertheless be a line break. It is also used with languages without visible space between words, for example Japanese. Normally, it is not a visible separation, but it may expan In...

Javanese script is scriptio continua, like many others, it doesn’t have space, and uses complex rules to affix characters (mostly vowels) to the right, left, bottom, top, of a base characters (mostly vowels). This is the default. But, sometimes, we don’t want that to happen; we can separate those characters by space, but since putting space is not natural, thus the importance of zero-width space. It separate those characters that naturally will join, but we don’t want to, and it’s invisible to our eyes. Only the computers can tell it’s there (and the fact that the two characters doesn’t morph together).

Technically, I treat ZWNJ and ZWSP as the same, they might do something different, but they achieve the same effect.

Thanks a lot.
I get it now. I am fascinated by the complexity of some languages, which is very challenging but also enriching.
Ibrahima

For *ZWNJ*, there are 2 variants *ZWNJiOS* and *ZWNJAndroid*. How should I choose? I intend to publish the keyboards to all supported platforms, but I do like the icon from *ZWNJAndroid* better. If I choose that, would it create problem for iOS users?

If you use *ZWNJ* then Keyman will pick the appropriate icon for the user’s device. However, if you prefer the look of the Android icon, you can use *ZWNJAndroid* and it will use that icon on both devices. I don’t expect it will be a problem for your users if you choose to do that.