\zbr showing up in song titles 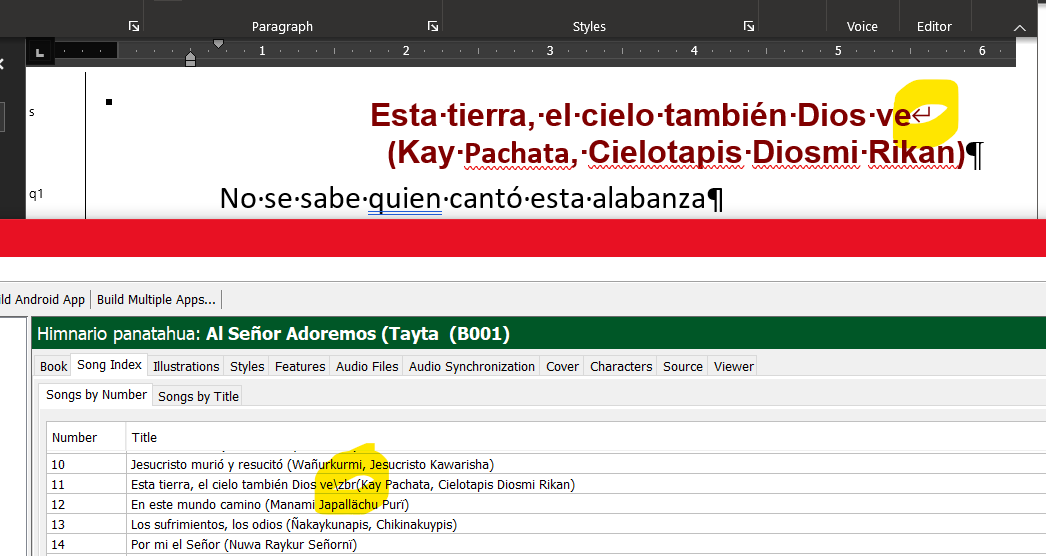 I have found that sometimes \zbr shows up in the song titles in SAB or RAB. This is because there is a “New Line” character in the title. In Word, activate the Show/Hide feature (backwards P with two vertical lines). When you see the arrow symbol, delete it and add a space if needed. Then after saving Word and updating the file in the App Builder, it should show normally.

If anyone knows how to automate this using Find & Replace, please comment below.

It is hard to tell if there is a space before the . But I think there is. But there should be a space after the \zbr but there is not. So I’d say it is a conversion bug. But also it should be stripped out for the title in the song title. I’ll write it up. But I only assess it as low priority as cleaning up the data fixes the issue.

In Word using search and replace, Use Special to select Manual Line Break and replace that with a space.

Thank you Ian! I appreciate the tip.

I was really surprised that using Ctrl + Shift + Space to generate a non-line-breaking space in Word worked to keep those words on the same line in the app. This, despite not being able to detect a difference in the unicode used for that space. How does that work, and how would I add a non-line-breaking space if I was to simply use a program like Notepad or Notepad++?

In word processing and digital typesetting, a non-breaking space,  , also called no-break space, non-breakable space (NBSP), required space, hard space, or fixed space,[note 1] is a space character that prevents an automatic line break at its position. In some formats, including HTML, it also prevents consecutive whitespace characters from collapsing into a single space. Non-breaking space characters with other widths also exist. Despite having layout and uses similar to those of whitespace, it...


On Windows you have Character Map. Just check the Advanced view check box and type into the Search for: no break space It shows an empty box but it is what you want
Then click select, then copy and paste into your document.

But that is a little tedious.

I use AutoHotKey to set up a short cut to write a no break space. Unless I have it in another keyboard Windows or Keyman keyboard that I am using.

If your text is only going into RAB the you can type something like == in the text and have the RAB Changes change == into \u00A0. If there are only particular contexts for the non breaking space then you could use a regular space in the text and just use the power of RegEx that is in the Changes to make the appropriate changes.

Thanks so much Ian for the info!

I didn’t know about the character map- that’s handy. At first it was something within Word. Then I realized that I just hand to hit the Windows key and type “character map”- that it’s a seperate program.

Apparently Alt + 0160 also works for the no break space, for non AutoHotKey users.

I guess the online Unicode checker I was using doesn’t give correct results for the no-break space, hence some of my confusion.