Why do some SIL fonts seem to be exactly like copyrighted fonts?

Except where very clearly noted, all parts of SIL fonts are original works redrawn from scratch. If we’ve used the font software of anyone else it’s been and clearly and legally licensed. There is no infringement, either actual or implied, so you’re safe to use Scheherazade (and any other SIL OFL-licensed font).

In this case, the Latin script glyphs in Scheherazade are based on another one of our fonts - Doulos SIL. That font was designed to be similar (but not at all identical) to Times and Times New Roman. It’s meant to provide a similar-looking design, but is not metrically or size compatible with TNR. If you look closely you’ll see lots of differences.

Thank you. Please excuse my lack of knowledge about this, but are the differences so subtle that if you size the fonts the same height (proportionally by pixel) and overlap them in different colors, you will need to zoom in full screen to see very subtle differences in a curve or two for a given letter? When you say “lots of differences” is that what you mean? Or is it more about the spacing between glyphs, or sizing at a point selection? I am just verifying to make sure that it shouldn’t be more evident in case I made any sort of mistake installing it or somehow mixing it up with the actual Times New Roman.

There are differences in the way that curves are shaped and constructed, how points are placed, sizing, and spacing. These are the artifacts of having been manually constructed to resemble but not reproduce the individual shapes. The differences are subtle, but I’m surprised that you are not seeing more differences than you report. Individual design decisions were inspired not only by Times New Roman (as seen in 1990’s versions) but by other versions of TNR, as well as Linotype’s versions (Times). I referenced features from all of those to create something that I hoped would be best suited for our particular needs, and sized and spaced for our custom use. (BTW I was one of the two people who did a lot of the initial work on Doulos decades ago.)

That is cool to hear - Congratulations on your beautiful work! You mentioned that you are surprised that I don’t see more differences. Could you take a look at the image I attached to this message? The red is Scheherazade positioned on top of Times New Roman in black. You can see the subtle curves of the edges that are the only difference I am seeing. Is that to be expected? Does the red look like the font you helped create? 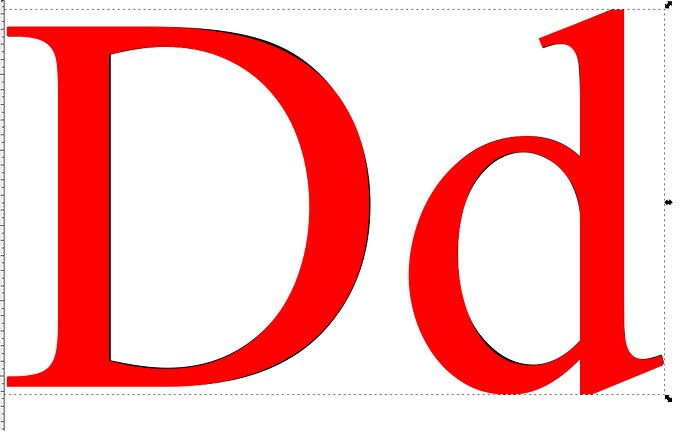 I can’t verify whether the shapes in your image are from Doulos or not, and can’t take the time today to try and reproduce your image myself. However the red images show differences in stroke weight, curvature, serif angle and width - those would be some of the differences between Doulos and TNR.

I appreciate your time and replies. I miscommunicated as the red font was Scheherazade over TNR in black. However, I just did the same thing with Doulos and see very similar subtle differences compared to both Scheherazade and TNR. I guess that confirms that to the untrained eye, the differences can be very subtle, yet can still qualify it as a different font, which seems to confirm that when downloading Scheherazade from Google’s Font library (or Doulos), I should be able to safely use it as a font that is not infringing on TNR or anything else. I was thinking that I did something incorrectly to have downloaded a font that seemed exactly like TNR, but I guess that is not the case. Based on what I have described, if you think I should look into this any further, I would appreciate any additional insight you might have. Either way, thank you very much for all of your time and information.

I agree that an Arabic script comparison would be more interesting in this context, Jeff, and thank you for the additional information. As you can probably tell I am no expert when it comes to fonts and typefaces. However, this discussion has opened up a whole new world for me and given me an even greater appreciation for this type of design than I had before. I was simply searching for an open source font quite similar to TNR to use in a commercial project I am working on, and Google’s font library showed the Roman version of the Scheherazade font by default, which matched up quite close to TNR. When I compared the two more closely, it led me to wonder if I made a mistake with the install where the font “fell back” (similar to what you described) to TNR or something else - or if Google is somehow allowing a font that infringes on TNR. However, based on what VictorG described, it sounds like for my purposes, the Roman version of Scheherazade is actually different enough to use for commercial purposes. I don’t think your comments contradict that, but would appreciate any further insight if they do. Aside from this purpose, I will now be paying more appreciative attention to the subtleties and artistic beauty of this craft.