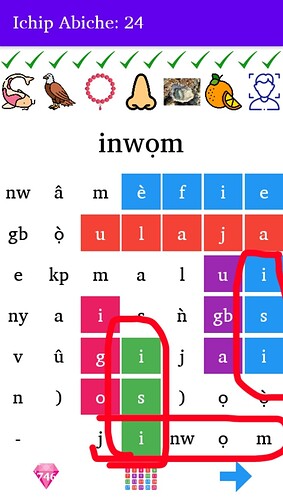 ISI (green) was played first before ISI (blue). Now INWỌM cannot be played because its “I” has already been used to play ISI (green).

Hello! Sorry for the delay in responding. I wasn’t receiving notifications, but I think that has been fixed. Wow, you’re up to 746 points!!

Thanks for catching this error. One of the two instance of the correct word appeared randomly, so we’ll have to create a fix for this. We have several interns programming this summer, so we’ll put this on the list.

Thanks. A related issue is this: the tile could go out of the screen area so one can’t see the complete word on the tile. Also, one tile may cover part of the word on another tile. 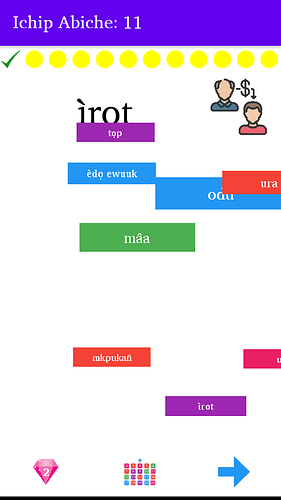 Yes, this particular game is not fully functional. For this reason, some teams decide to exclude the game from their game list. We still need to make fixes. It’s on our to-do list. Currently, it tends to show elements off screen in the first iteration and then in following iterations locate the elements within the screen without overlapping. It was an experiment with trying to create a non-static layout.