Using eu arrow and eu caron on Facebook : how?

Hi there!
Question 1: I am writing a grammar of my african mother tongue using eu arrow and eu caron fonts to represent the nasal sounds like. I can use them with word but not in Facebook, how to do that?

Question 2: where can I provide fonts with diacritic horizontal hiphen above the consonns and voyels?
Thanks

Can you provide us with more information on which language your African mother tongue is, and the language code if you know it? Also, which font are you using in Word that is not working on Facebook?

PS. I have moved this topic to Keyman, as it is probably more relevant here.

Hi Chris,
Thank you. I did not expect to receive a quick answer.
My mother tongue is the “vili” which was spoken in the ancient kingdom of Loango in the coastal width of central africa. It includes the yoombé, kotchi, lindji, lumbu and woyo. Most of those languages are in Cabinda, the part of Angola and also in the south of DRCongo.

The official language there is French but sometimes I realized that using French to describe my language is hard because there are some sounds that are not available in the French sounds or alphabet, like many nasals.

My aim also is to use kin letters to express some sound.
So I use the :
1-EU Arrows : for the consonants (an arrow on top of a conson) to indicate an intuitive way of expressing the nasals on the consonant below.
2-The Eu Caron: for the vowels (a Caron on top of a vowel) to express the nasalisation.

The other letters or sounds remain the same as in english.

See here attached some examples of how I write. You will see consonants with an arrow on top of them.

Those letters cannot be inserted in a normal email or on Facebook.
I would prefer to have a bar on top o a consonant or a vowel instead of the arrow and the Caron, so that it could be easy to anyway learning my vili language could see that, for example, when you a “b” it is a “b”. But if that “b” bears an horizontal bar on top of it, that means the sound changes and is nasalized. How could this be possible? How much would this cost?
I don’t know if my demands are clear.

Thank you so much for reading this.

PDF attachments are blocked on this site. Could you try posting a screenshot image or a link to your sample text? Thanks 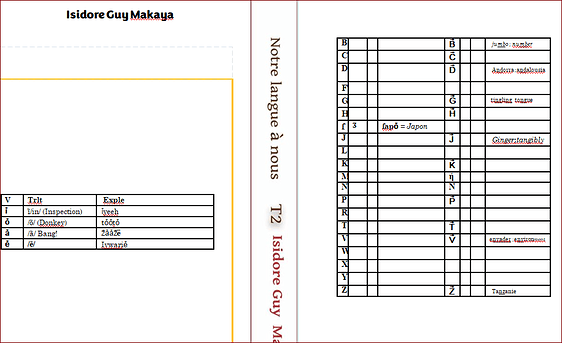 @Matthew_Lee - Do you know if sil_cameroon_azerty would work for typing arrows and caron?

If so, @kathane could try installing Cameroon AZERTY keyboard

Caron (ě) and Trema (ë), and macron (K̄) are no problem for many keyboards (including the Cameroon Keyboards, EuroLatin, Pan-African) and most fonts.

Cameroon Qwerty or Azerty support the diacritical symbols above (as can EuroLatin), but, @darcy the arrows that I imported from the French AZERTY (below) are not the same.

Kathane’s are combining arrows, but I used the the stand alone arrows.

Unfortunately, Kathane is using the very rare U+20D7 K⃗ (ScriptSource - COMBINING RIGHT ARROW ABOVE) in his document which I only found in DejaVu and Code2000 (these are obscenely HUGE fonts) on my computer. SIL fonts don’t include this rare character. This is why it doesn’t work on Facebook. No Keyman keyboards use that character, and I can’t find any published languages that use it.

It seemed odd at first that 20D7 has existed in Unicode since 1993, but so few fonts include it. I understood when I realized that it is listed as a diacritical mark for symbols and not intended for attachment to letters (Combining Diacritical Marks for Symbols - Unicode Character Table). To use it on letters would be counter to the character’s definition. Since this is the case, using that character would limit your writers and readers to a very small subset of fonts, and it could still be another decade or two before fonts started including it regularly.

If defining a new roman-script orthography, I suggest you choose diacritics from the 0300 block of Unicode (Combining Diacritical Marks - Unicode Character Table), and if you choose something from the first two lines, you could use practically any font on desktop and mobile. Another possible option would be the contour marks from here (Combining Diacritical Marks Supplement - Unicode Character Table).

Personally, my suggestion would be to use U+0303 (K̃) as the tilde already means nasalization in many world languages.

The combining right arrow is U+20D7. However, you will find very few fonts that would support this character. It looks like that character was added for symbols. I think you would be doing a disservice to your language community to choose that character since most fonts will not display it properly.

I see Matthew has just responded giving you some better suggestions for the combining caron, macron, and tilde.

Thank you Lorna,
You’re right!
It’s better using the tilde than the arrow.
I will review it.