Store (&CasedKeys) with many characters but few keys

This issue is related to the topic: Problem With Caps Lock Output
The documentation is not really clear to me.
How do I use the store(&CasedKeys) keystore for a keyboard that has more characters than keys?
For example:
In this keyboard, there is “a”, “à”, “â” “á” “ǎ” with “A”, “À”, “Â” “Á” “Ǎ” respectively as the upper case equivalent.
But there’s only one key for the base letter “a”, and four keys for the diacritics (grave, circumflex, acute and caron) so that whatever the base letter may be (aeioọumn or AEIOỌUMN) the four accent keys do the placement of accent on them all. This means that there are 80 characters to be produced using only 12 keys. How can this keystore be used to handle this?
It seems the documentation doesn’t mention this kind of scenario.

I think Caps Lock (the reason you would be using store(&CasedKeys)) is only intended for use with keys that are on your keycaps. So, if you put [K_A] to output “a” or “A” depending on whether Caps Lock is on, then it would work.

The Keyman team recently did some webinars that you might find helpful:
https://keyman.com/14/webinar

In the Keyman Developer one, there is this slide which might be helpful to you: 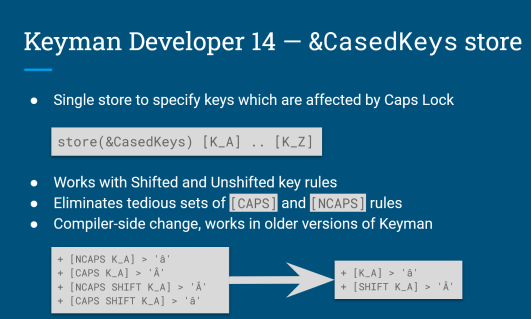 Your explanation and the link to the webinar have solved this issue. Thanks.

Another challenge I have now is with the digraph keys. I want this particular key to output “ch” in the unshifted state, “Ch” in the shifted state, and “CH” in the capslock state. How can that be done? Someone asked that question in the webinar, and @Marc said to “override.” How is override done?