Shift+Tab shortcut does not work in the latest version 3.1.1.1 of Speech Analyzer

The (very important) Shift+Tab shortcut does not work in the latest version 3.1.1.1 of Speech Analyzer. (Windows 10/11)

Thanks for your feedback. What are you expecting to see when you press Shift+Tab? Are you referring to jumping between data fields in reverse?

Hi Christopher,
According both to the documentation and my experience with older versions of Speech Analyzer:
“Select a new active graph. Shift+Tab”
Thanks,
Roussi

Thank you for your valuable feedback. We have published version 3.1.1.1 with limited testing and would invite you to test SA releases and report bugs directly as issues on GitHub at: Issues · sillsdev/SpeechAnalyzer · GitHub You’ll need to login to GitHub first and then click the green “New Issue” button to get started. Each item should be documented as a separate issue so it can be tracked and fixed separately.

Several years have gone by since the last version of SA 3.1 was built and released. Can you confirm what older version of SA you are using that does not exhibit these issues? Thanks.

The SA I am using (professionally) is v3.1.0 and it works great. Unfortunately, only the last version of SA seems to be freely available and my students can’t download any older versions.
Thank you, Chris, for the useful information you kindly provided about the best way to report bugs in the newer versions.
Roussi

Thanks for reporting the issues. I have limited availability each month to work on Speech Analyzer, but will prioritize getting a fix on the Shift-Tab shortcut the next time I’m working on it.

A quick comment:
SA provides the following 3 options for moving to the next Blue background marker. 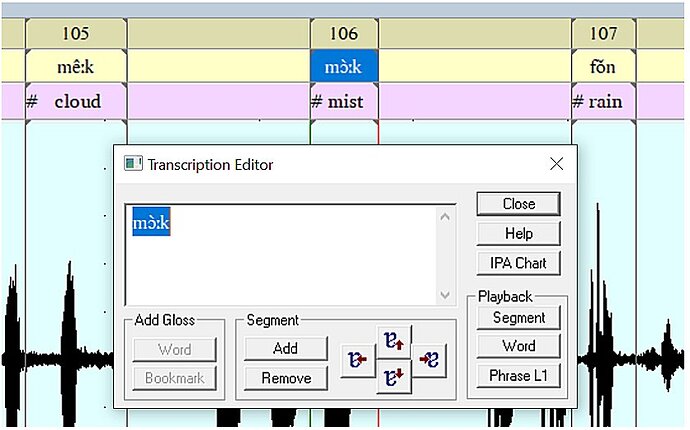 My comment is that these options are particularly useful for those, including myself, who work intensively with SA and prefere using keyboard shortcuts.

I’m sorry about this situation.
SA is currently not able to support Shift+Tab to move to an Active Graph.

Would you try using Ctrl+Tab instead and see if that would work for you?

Yes, of course, I’ll try using Ctrl+Tab instead of Shift+Tab. However, Ctrl+Tab is already used to switch between windows (audio files) in one instance of SA. Switching between graphs is more important for me personally, but… I don’t know.
Thank you,
Roussi

But the use of Shift+Tab in older versions of SA used this feature to move from one Graph (a Plot window within the open file) to another Graph in that same open file. For example, using Shift+Tab to move from Waveform, to Pitch, to Spectrogram within a single open file.

After some amount of searching I found that the following changes were made in the SA source code on Aug 7, 2015.

There was no comment as to why Alt+Tab was removed.
The Shift+Tab feature was changed to provide the convention of using tabs to move right and left: Tab and Shift+Tab.

It’s clear that this change broke the feature in SA of “Select a new active graph. Shift+Tab”.
Unfortunately the feature of using Shift+Tab to move between multiples Graphs in a single file never got fixed.

I suggest that this issue be put on a to do list.

Hi all
I’ll be tackling this issue this week.

Can I propose the following shortcuts:
Ctrl+Down to select next graph
Ctrl+Up to select previous graph

If the selected graph is already first/last, it will wrap around.

This way, we don’t disturb the existing shortcuts involving TAB (and preserve the convention of left/right with TAB).

Delving into the code, I also note that Alt+Down and Alt+Up are already shortcuts to Down/Up Transcription.

That would be great! Even better than Shift+Tab (because more intuitive).

If the selected graph is already first/last, it will wrap around.

I am not sure. The more often we work with only two graphs displayed. Even if we don’t know which graph is the active one (I have poor eyesight), we could easily make the best choice between the two shortcuts. But this is not very important and I would be happy with either way.

Thank you very much,

Thank you for the new version 3.1.1.2. The new keyboard shortcuts are very helpful…
Roussi

Glad you already found the update.

We weren’t able to update the help this time, but there’s a reminder of the new shortcuts on the “Edit” menu: 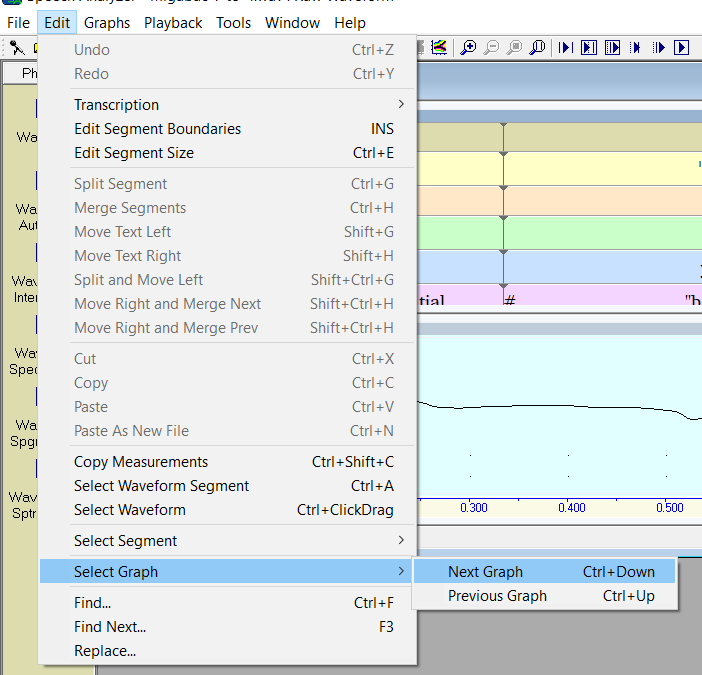