I finished my mnemonic Sanskrit keyboards both for devanagari input and roman transliteration. Both work perfect on Windows 10 and LibreOffice and I tried them for a while.

Now friends from me in the UK want to use the keyboards, both have mac Catalina OS 10.15.2. and the newest Keyman version.
But: on one system with the devanagari keyboard the vowels following a consonant don’t work at all in LibreOffice and Chrome, but in TexShop they function except the devanagari short ‘i’ , which normally should be placed in front of the consonant is placed after it.
In the second system libreOffice works except the double svarita doesn’t show correct.
It’s hard to figure it all out, as I only have a PC. So maybe somebody could test it on Mac or give me a hint, where the problem could come from, maybe some settings in the Mac?

I uploaded both the kmn and the kmx for the devanagari keyboard.

Thank you for reporting this issue on the community site.

Could you give me an example or two so that I can test them out?
Ideally, please include “Key Press,” “Actual Output” and “Expected/Correct Output”.

It would also be helpful to know the fonts and the exact version of Keyman that are being used in each case. (Every version was the “newest” at some point!)

We tried keyman version 12.0.7. and now tried 13.0.8 too with the same result.
To keep it simple we use Mangal font. But we tried others like sanskrit 2003, shobika and siddhanta.

Could you give me an example or two so that I can test them out?
Ideally, please include “Key Press,” “Actual Output” and “Expected/Correct Output”.

Example 3 in TeXShop (this is the only issue in TeXShop!!): 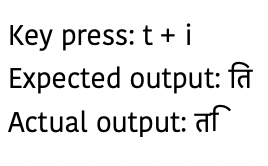 @Saarthaka We may have to test this and see if there is a fix on a case by case basis as this may be a bug/limitation in macOS.

@drowe I have tested the keyboard on macOS Mojave 10.14.6 with Keyman 12.0.50. The three test examples work as expected in Messages, TextEdit, Notes, Safari and Stickies; but not working in LibreOffice, Chrome (for mac) and FireFox.

Interestingly, this works OK in MS Office,Chrome and LibreOffice on Windows, in FireFox on Windows it looks like the some rotation rules get rid of what should be kept.

@Marc Does this ring any bells?

I have tested the keyboard on macOS Mojave 10.14.6 with Keyman

Actually on the mac, on which the problems show up, initially was macOS Mojave, but then upgraded to Catalina thinking Mojave was the cause of the problem. But it didn’t brought any change.

I used to develop Keyman for macOS. The specific OS version is not likely to make any difference. The issue is compatibility with specific programs on the Mac. As was pointed out, the keyboards work properly on ordinary text-based programs (such as TextEdit). Unfortunately, some of the more advanced word-processing programs as well as browser-based or Electron-based programs handle text input differently as don’t completely conform to Apple’s standards. In some cases, I was able to come up with work-arounds that mitigated the problems to some extent in some programs, but in other ran up against obstacles that I was not able to get past. In some cases, the best solution might be to use TextEdit to enter large amounts of text and then copy that text into the document you are working on in the problematic software. I know that that is less than ideal, but it is a wrok-around that may be aceptable in some situations.

@makara would you mind going ahead and creating issues for this in GitHub so we can chase it there? Keep separate issues for each app that has conflicts (and obviously problems on Windows should have their own issue as well).