I have 2 problems with the above mentioned keyboard.

For a while, I switched from Khmer-Angkor to Other-Khmer (KMFL) because that was more stable. However, there were inconsistencies in FLEx and LO when I typed sonlab pi and treysap. Sometimes with tresap and a vowel above, both would stay above (as it should be) but then other times when I type, for example, ឞ៊ិ, then the tresap becomes a ស្រៈអុ, so there are inconsistencies in my word list.

So I decided to start again by removing both the Keyman and KMFL keyboards from my system and reinstalling them. First I just reinstalled the Keyman keyboard. In FLEx I added that keyboard to the relevant writing systems, but could not type anything at all in any field set to Khmer script. The same happens with the KMFL keyboard. But in this text box that I’m typing in now, it works but មានបញ្ហាតែមួយ ជាអក្សរ ឞ ដូចនេះ៖

Also in LO the line spacing doesn’t come out right (see screenshot) in both Keyman and KMFL. I’m Wasta-Linux 18.04 (Ubuntu) using Keyman 11. I followed the instructions in this forum for uninstalling the old KMFL and reinstalling it from the new PPA. I am on FLEx 9.0 beta. 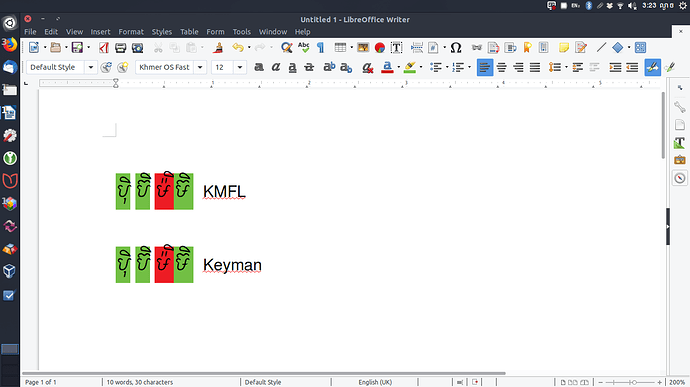 it seems in LO the line spacing, which clipped off the top of the vowels when I typed, resolved itself before I took the screenshot because it looks fine in that screenshot

Now with Khmer Angkor, trying Mondulkiri font instead of Khmer OS Fasthand, the sonlap pi and treysap consonant shifter is working with ប but the opposite was round with ឞ. Screenshot attached. 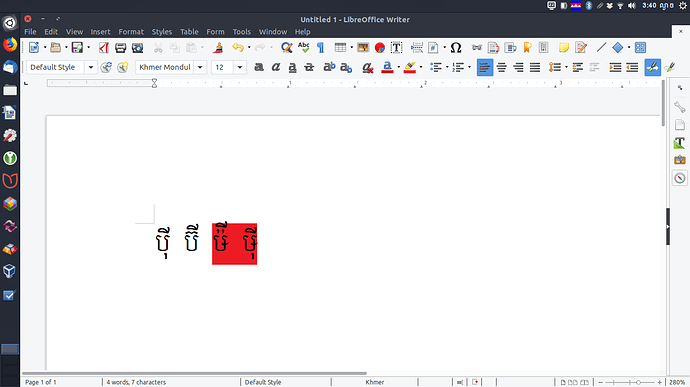 Now I can type Khmer script again in FLEx but the បឞ and treysap problem has returned. I guess to really find out what’s going on you need to test it on a Linux machine. 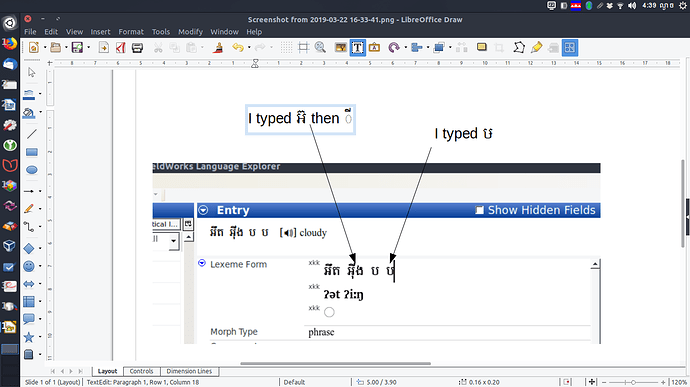 Hi Ian, looks like you’ve got a swathe of different issues that you are challenged with here!

First off, which language are you working with – it’s not Khmer but another language using Khmer script, is that right? What are the orthographic conventions for that language around consonant shifters and the ឞ consonant?

I would like to investigate the FLEx issues – the crash, and the inability to type ឞ, with you further. Do you get any error messages when the crash happens, or does FLEx just disappear? Does it happen consistently? Can you give the exact version number of FLEx 9.0 beta you are using so I can try to reproduce it here?

The issues of how treysap displays are font related rather than keyboard related. The combination of ឞ with vowel and consonant shifter are clearly not consistently supported across fonts.

In my tests, Khmer Mondulkiri has the usage swapped, as you experienced. MoolBoran is the only font on my system that works as expected with treysap. It might not be the font you want to use on a daily basis

The Khmer OS fonts, and DaunPenh leave consonant shifters above the consonant even with a superscript vowel, e.g.:

And (not that we really care) but Leelawadee UI messes it up completely:

Once you are confident of the orthographic requirements, it would also be worth asking the font developers to work on support for these combinations (which are not used in modern Khmer but appear to be in other languages). It may be there is a conflict in usage, but I don’t have enough data to support that at present (@makara, is this possible?) @makara, what does your Khmer Character Specification note about usage of treysap and muusikatoan with this consonant?

There is a workaround that works with Khmer Mondulkiri, if all else fails. The character codes Zero Width Non-Joiner (U+200C) and Zero Width Joiner (U+200D) can be used to force the alternate renderings:

If that ends up being the solution you need, Makara can make a version of Khmer Angkor to support that.

The line clipping in LibreOffice is a display issue with that app. As you saw, it tends to resolve after a bit when the screen redraws. But you could raise it as a problem with them if it continues to be a concern.

It may be there is a conflict in usage, but I don’t have enough data to support that at present (@makara, is this possible?) @makara, what does your Khmer Character Specification note about usage of treysap and muusikatoan with this consonant?

There is a workaround that works with Khmer Mondulkiri, if all else fails. The character codes Zero Width Non-Joiner (U+200C) and Zero Width Joiner (U+200D) can be used to force the alternate renderings

This alternative helps with what is shown on the screen, but will it introduce a separate issue with searching and word counting?

The ZWNJ / ZWJ is an appropriate solution if used consistently, unless we decide that the Khmer Mondulkiri font has the rendering backwards? Certainly it’s a solution for Ian that would work for his FLEx data as that is a controlled environment, even if it is not great for data interchange or web publication at this point.

Within FLEx it is also something that can easily be changed if a font-based solution becomes more appropriate in the future.

Sorry I’ve not had the chance to respond yet and tell you which FLEx I’m using. Give me a minute and I’ll sort it …