I just installed the SIL EuroLatin keyboard and was wondering if the ɲ as a long-press option for ‘i’ was a bug. 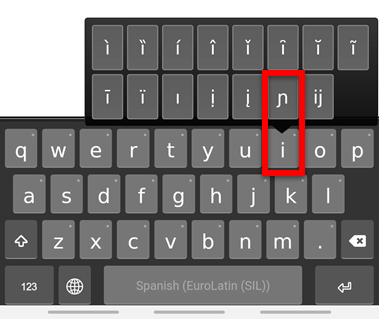 Should it be a long-press option for ‘n’? I don’t know European scripts that well, so could be totally off.

I think this might be intentional as the capital version of this character is on this same key on the Shift layer. @Lorna, can you confirm this?

The reason it is on i seems to be because on the Desktop keyboard the keystroke is =i to access that character. There is no reason we couldn’t add it as a longpress to the n as well, but I suspect the reasoning (maybe mine) is that the relationship between desktop and mobile needed to be retained. Of course, that is not necessary.

I saw that it was the same on the capital long-press as well. My thought is that if I were to look for that character, I would not look under “i”, I would look under “n”. But as it currently is, I wouldn’t find it under “n” and that may confuse users.

I do think that adding it to the long-press for “n” and “N” would be a good idea. I’m not very knowledgeable about keeping the desktop and mobile keyboards in sync, so don’t know if it should be removed from “i” or not… I think I heard your goal is to have the same characters available in the same way on both desktop and mobile environments. Is that right?

I wouldn’t suggest changing it on the Desktop version as it seems users are more used to typing “odd” combinations on a desktop keyboard (like the IPA keyboard).

Yes, we do want to keep the same character repertoire in both desktop and mobile if possible. I cannot change it on Desktop because we added that character recently and there were no more spots available on “n” keys with a modifier. We just “shoe horned” it in where we could.