I’ve seen similar topics here but I haven’t found a good solution to my problem so far. I’ve been using Keyman for years to write polytonic Greek with a custom Keyboard for German keyboard layouts. Works fine but for one thing: macrons and accents on the same vowel. These don’t exist as precombined characters so they need to be formed with combining diacritics. Is there a way (one of your polytonic Greek keyboards) to do this fast when one has a European (German QWERTZ in my case) keyboard?

Welcome to the community, Kai.

For the Polytonic Greek keyboard, there is a Complete typing chart - Greek Polytonic Unicode Keyboard. You may find this useful. If it is not what you are after, please clarify your intention again.

Thanks for your reply. What I’m trying to achieve is something like this: ᾱ́ (an alpha with a macron, acute accent and possibly also breathing mark).

The keyboard you’re referring to (Greek Polytonic Unicode by David Perry) is capable of doing this, I think. The trouble is, it is only intended for people with an American keyboard layout and gets very awkward to use for someone with a European keyboard (like me).

There are other keyboards for Classical Greek (Classical Greek Keyboards) that seem to work better with a QWERTZ keyboard, e.g. Galaxie Greek/Hebrew Mnemonic. But they don’t seem to allow you to produce macrons and accents on the same vowel.

So my question is: Is there a user-friendly way around this problem?

Thank you very much.

So my question is: Is there a user-friendly way around this problem?

It seems like you are looking for a Greek keyboard with QWERTZ layout - that allow accent + breathing.

What I’m trying to achieve is something like this: ᾱ́ (an alpha with a macron, acute accent and possibly also breathing mark).

If the characters do not get combined in a particular software/application, that is a separate issue.

It seems like you are looking for a Greek keyboard with QWERTZ layout - that allow accent + breathing.

No, that’s not a problem. Let me try differently.
This is an accent: ά
This is a breathing: ἀ
Combining those is not an issue: ἄ (There are pre-composed Unicode characters for that. Any keyboard for Classical Greek has to be able to produce this.)

This is a macron: ᾱ (This does not belong to the group of accents nor to breathings, it marks vowel length in texts for students, dictionaries, grammars etc.) Also no trouble here. Most keyboards can produce this.

The problems start when there are words (and there are lots of them) that have an accent (and possibly also a breathing) and a macron on the same vowel, like this: ᾱ́

For the last case, there are no pre-composed Unicode characters. So I need a keyboard which is able to use multiple deadkeys for combining diacritics (including macrons) to produce such characters. Only very few keyboards seem to have a provision for that. Greek Polytonic Unicode by David Perry (Greek Polytonic Unicode Keyboard Help) seems to be one of the few. But it is very hard to use for people with a Non-American keyboard.

So that’s the problem. It’s not about characters not displaying correctly. I can see them just fine. It’s about producing them.

Now the question: Given the situation above, is anyone aware of a user-friendly method of typing those characters with combining diacritics on a QWERTZ keyboard. Can keyboards like Galaxie Greek (Mnemonic) be modified to allow input of combining diacritics or is there another handy approach?

Can keyboards like Galaxie Greek (Mnemonic) be modified to allow input of combining diacritics or is there another handy approach?

The keyboard is under MIT license, so you can modify the keyboard however you want.

Permission is hereby granted, free of charge, to any person obtaining a copy of this software and associated documentation files (the “Software”), to deal in the Software without restriction, including without limitation the rights to use, copy, modify, merge, publish, distribute, sublicense, and/or sell copies of the Software, and to permit persons to whom the Software is furnished to do so, subject to the following conditions:

The above copyright notice and this permission notice shall be included in all copies or substantial portions of the Software.

THE SOFTWARE IS PROVIDED “AS IS”, WITHOUT WARRANTY OF ANY KIND, EXPRESS OR IMPLIED, INCLUDING BUT NOT LIMITED TO THE WARRANTIES OF MERCHANTABILITY, FITNESS FOR A PARTICULAR PURPOSE AND NONINFRINGEMENT. IN NO EVENT SHALL THE AUTHORS OR COPYRIGHT HOLDERS BE LIABLE FOR ANY CLAIM, DAMAGES OR OTHER LIABILITY, WHETHER IN AN ACTION OF CONTRACT, TORT OR OTHERWISE, ARISING FROM, OUT OF OR IN CONNECTION WITH THE SOFTWARE OR THE USE OR OTHER DEALINGS IN THE SOFTWARE.

This keyboard allows you to type combining marks separately: Polytonic Greek (SIL) keyboard
The problem is that it is designed for QWERTY. You would have to work out the differences in layout to figure out which keystrokes to use for the combining marks. If I remember correctly you might have problems accessing the < and > which are used for combining marks.

Alternatively, you can go to Keyman Configuration / Options, go down to the bottom under Advanced and change Base keyboard to English - US. However, that isn’t customizable by keyboard, it’s an across-the-board change that I suspect you wouldn’t want to do!

The problem is that it is designed for QWERTY.

Per help documentation, “It is a mnemonic Keyman keyboard. This means that the arrangement of the letters in the Keyman keyboard will depend on the order of the keys on your hardware.” 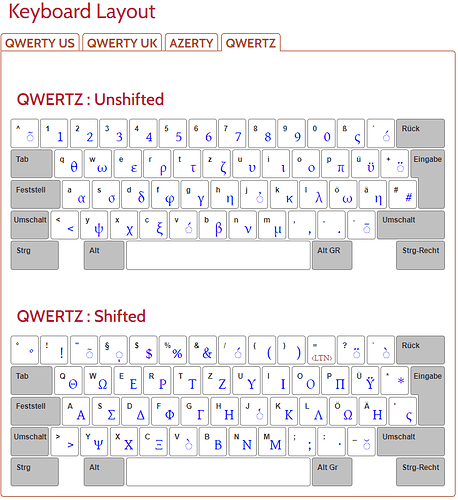