How does the keyboard know to start processing a string? If I type letter vowel vowel vowel letter, how does it know that I intend the first 2 vowels to go with the preceding letter and the third to go with the following letter?
I think we need to say that everything else can be entered randomly, but the letter must precede everything else. Then when the next letter is typed, we can process the entire string. Would that work?
I’ll need to get more details on the constraints. Rule of thumb is that 2 marks of the same class occur not infrequently on a letter, but my guess is that 3 or more are rare.

How it works depends on the keyboard developer.

For some scripts it is safe to assume that all diacritics combine with the base character that precedes them. Although for some language specific keyboards I deliberately do not do that. Is for a sequence like āä it can be typed a + diaeresis + a + dieresis. But I also allow a + a + dieresis to generate ää as a typing shortcut since the sequence aä is meaningless and can not exist in the orthography the layout the keyboard was designed for.

So as I said it’s really up to the keyboard developer. But care needs to be taken when the complexity of the rules increase.

For such scripts there is a distinction between visual and logical keyboards where certain class of combining characters are typed before the base (in visually ordered input) but are reorder by keyboard rules to an appropriate position after the base character.

The presentation characters for Hebrew should typically only be supported for legacy situations dealing with (very) old data. We would not normally advise including them in a keyboard created today.

You really do need to choose a paradigm for a keyboard – either logical, or visual. Otherwise, there will inevitably be irreconcilable ambiguity. For example, if I type base combining base, should the combining mark be attached to the first or second base character?

Selecting a paradigm like this also helps your keyboard users to know how to get started. There are plenty of rules they already know for writing their language and the idea of having structure won’t be a problem. The problem comes when there are somewhat arbitrary and complex ordering requirements based on technical limitations, which is the challenge you’ve already been trying to solve with the diacritic order :).

I would urge you to consider leaving the precomposed letters out of a generalised keyboard. They should only be used in very exceptional circumstances and increasingly less often. If you really do want to support the precomposed forms, then I think that putting them in a separate keyboard will create less confusion for your users, and directing them away from it with fairly strong phrasing. For example, “unless you know you need these precomposed letters, you should be using instead my generalised Hebrew keyboard <here>” or something of the like!

This should also simplify the logic of the keyboard because the models for character encoding are so different.

putting them in a separate keyboard will create less confusion for your users, and directing them away from it with fairly strong phrasing. For example, “unless you know you need these precomposed letters, you should be using instead my generalised Hebrew keyboard ” or something of the like!

either logical, or visual. Otherwise, there will inevitably be irreconcilable ambiguity. For example, if I type base combining base , should the combining mark be attached to the first or second base character?

A keyboard developer when developing with combining characters has two options:

Personally I prefer the first approach, although more and more I am leaning towards developing orthographically responsive keyboard layouts.

No, those rules would only impact the final two characters in the string.

I understood the rules better after I translated them into Excel.

I then applied rules as shown in attached chart. After Rules 1 and 2 were applied in the 3rd iteration, all strings were in correct order.Keyman - Excel chart.zip (25.7 KB)

I am guessing some of these combinations are vanishingly rare but it’s nice to be comprehensive!

from a programming point of view, is there any difference between these two?

There is no difference; those rules are identical once compiled.

Ok. I got my keyboard to compile with all its rules. However it is not reordering anything when I type either in Test Keyboard or typing in Word. Did I leave out a magic word?hebnew01a.kmn (44.6 KB)

I’ve been away on leave for the last 3 weeks – am back on deck now. Can you give some examples of what you expect (e.g. key sequence, expected output) and then I can test the keyboard and give you feedback. 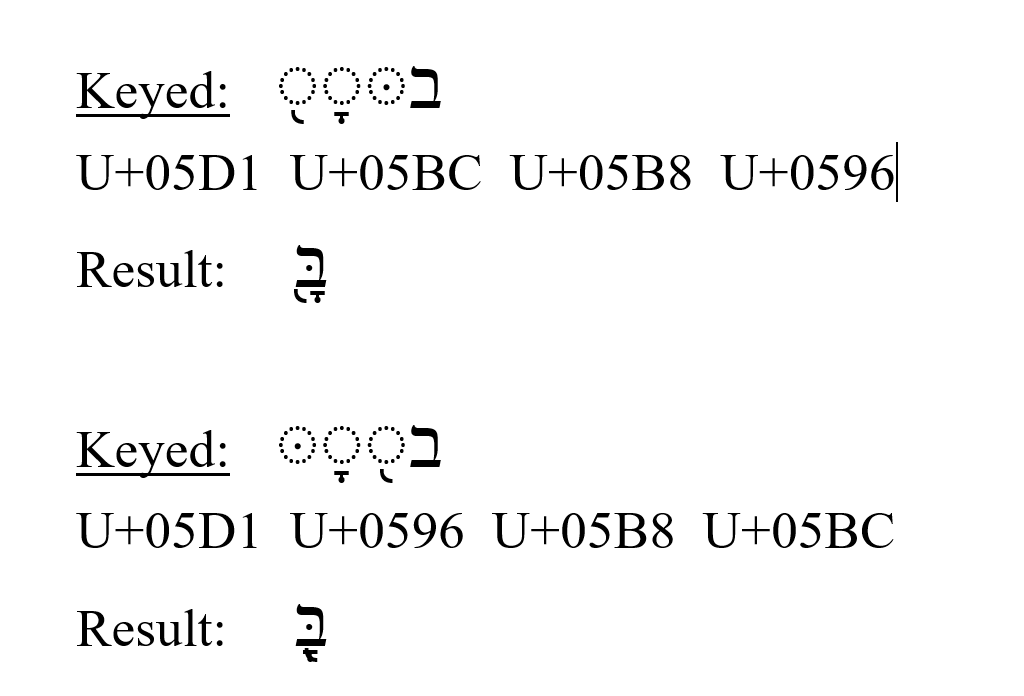 See the attached screenshot of a Word document for an example.
Below is what I was hoping the reordering rules would do.

Let me know if this is what you need.
Thanks.

I added that rule on my copy of the keyboard (anywhere in the main group is fine), and then the reordering worked as you would expect. 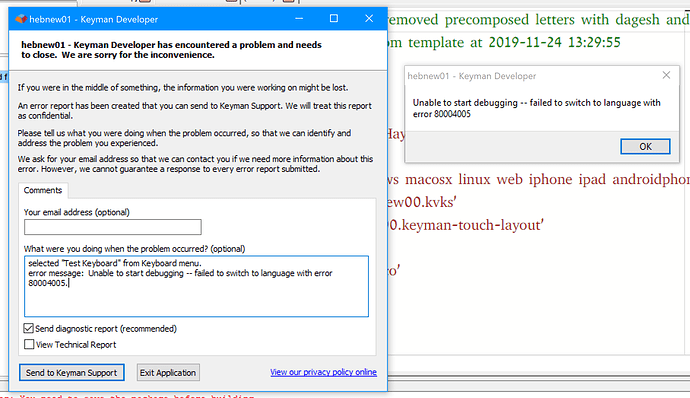