Not working with coreldraw

sir after update windows XP to windows 10 and Keyman 6 to 14, tamil keyboards are not working with fonts (like TM Valluvar, Ka Vasantham) in coreldraw.

Welcome to the community, @Venkates_Kumar!

Which of the Tamil keyboards are you having this issue with?
We have a list of them at Keyboard Search.

Please also give us a specific example of what you mean by “not working with fonts”.

I try Tamil99 & New Typewriter Keyboards it working perfectly in all social media. but i try to type in corel draw and photoshop with TM-Valluvar, Ka-Vasantham fonts. it couldn’t show actual characters. it shows only boxes

It looks like the issue you have is with the font, not Keyman. The Tamil99 keyboard works as expected outputting Tamil characters without any issue in CorelDraw, expect when the font is change to one of the two you mentioned above. 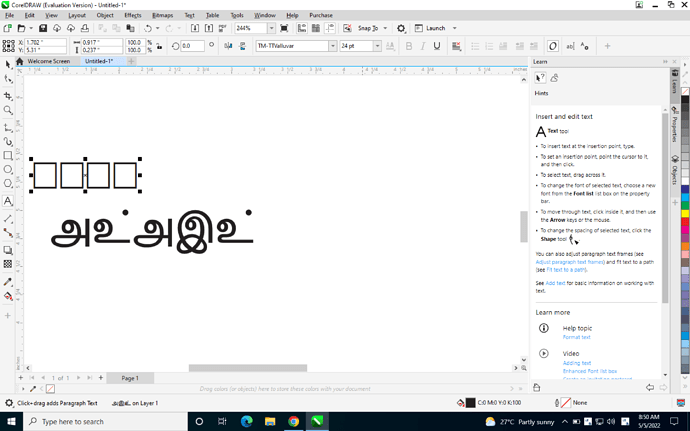 From memory TM-Valluvar is a legacy Tamil font from CDAC, so the Keyman keyboards you tried would not work with it. To use the font you will need a legacy keyboard layout that uses the same mapping as the font. Not familiar with the Ka-Vasantham fonts, but considering you encountered the same problem, they are likely to be legacy fonts as well. pre-Unicode, there were many different legacy encodings for Tamil. It is likely that TM-Valluvar may require a different keyboard layout to Ka-Vasantham.

The boxes (.notdef) glyph is used when the character you type isn’t available in the font. Considering you used a Tamil unicode keyman layout, indicated that there are no Tamil glyphs in the Tamil Unicode block within the font. Thus it is an older pre-Unicode font, what we tend to call a legacy font.

Years ago I used CorelDraw on my XP machine. When I updated to Windows 7, CorelDraw didn’t work any more. They said I’d needed to buy the new version, which was very expensive. I never used Corel Draw since. This may be your problem, not Keyman.