And the information about the original work seems to be stuck in English: 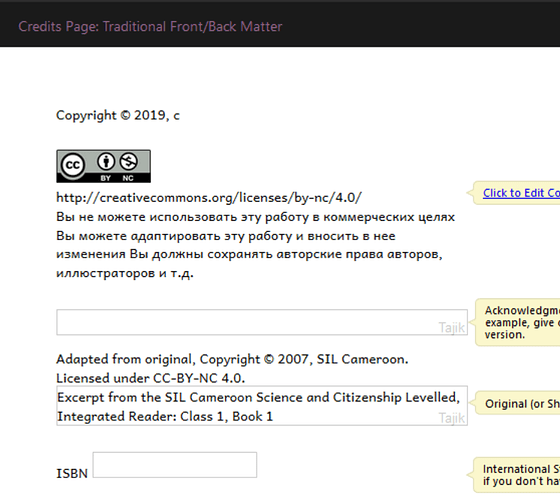 … see the text beginning “Adapted from original” – it’s not in an editable box. Can we translate this into our national language?

Another place with a couple of small problems is the title page: 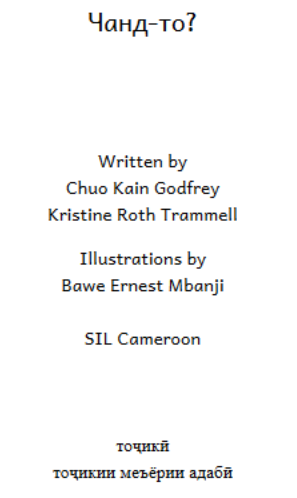 Many languages do not capitalise the names of languages. If you enter the name in all lowercase, it would be nice if Bloom would capitalise them if it’s at the start of a sentence or phrase. (In my case, I used the Province field to say “Standard literary Tajik”, which should also be capitalised in the above example.)

I also notice that, unlike my book title, the name of the language and variant is stuck in a seriffed font that Bloom substituted before I switched the font from Andika New Basic to Andika. How can I fix that?

Overall, can some of what I want be done by using a “Front/back matter pack”?

Background:
In our culture, having English text in a local book shouts, “this was done by Westerners!” Some books we translate may have Westerners involved; some may be done entirely by locals. In either case, that’s not the message we want to give.

Way to tell Bloom that my book isn't really a derivative
More freedom in layout and content for front and back cover pages
WDavidHJ November 18, 2019, 11:30am #2

I’d also like to note that in our country, and probably in a number of former Soviet countries, the last page of the book (facing the inside back cover) must list what the government refers to as “technical information”: where the book was printed, the printing technology used, the government permission-to-print number, the number of copies printed in the print run.

The shell books I’ve seen so far don’t always have a blank page here, but it seems easy to add one if you unlock the book. It’s good that we can do this easily.