Localize Art of Reading and Bloom

What is the process if we need to localize/translate Art of Reading into another language.

This would be for a language that the Bloom and AoR interfaces are not currently available in.

What is the process if someone wants Bloom interface in their language?

A note on Crowdin: we are hoping very soon to split up some of the files by priority based on how important the strings are in the UI. (So there would be BloomHigh, BloomMedium, BloomLow, for example.) So it might be worth waiting until we do that to get started.

I’ll have to look up how the Art of Reading gets new languages in the index.

It looks like we don’t have any fancy process for adding to the Art of Reading index.
As far as I can tell:
English and Indonesian were part of the original collection.
Russian was submitted and added in 2016. But I’m not sure what the process was. Maybe @JohnHatton remembers?
The other languages were added via Google Translate (acceptable since this is just for the search index).

What language are you interested in? If machine translation is not a good option, we could at least provide the index file to you which is just a tab-delimited file which can be opened in Excel, and you could go line by line and add the language.
However, I just looked. There are over 11,000 entries, each having more than one term. Of course many of those terms are duplicated on other lines, but that argues even more for some kind of automated process.

Andrew, Liz made this post for me. I’ve already created a machine translated version of the list and added it to the AoR index.txt file. I wasn’t able to see the language as an option in the search. As index.txt just contains the two letter code for the language, and the language choice option provides a complete language name, I’m assuming there is some hard coding somewhere.

I’ll send you the machine translation and modified version of AoR’s index.txt file in a separate email. I have someone who’se willing to take that Machine translation, as a starting point, and clean it up.

I did play with my installed index.txt briefly, and I was able to get the language to show up in the language chooser, though it was at the bottom of the list as “Unknown Language (lao)”. But it does seem to work.

I’ll check out your file when you send it to see what I might have done differently, but basically all I did was add a dummy {tab}abc at the end of every line except the first line where I added {tab}lao.

though it was at the bottom of the list as “Unknown Language (lao)”.

Indeed. Using the correct code, the Image Collection control automatically looked up the language name. All I changed was the file I mentioned above. 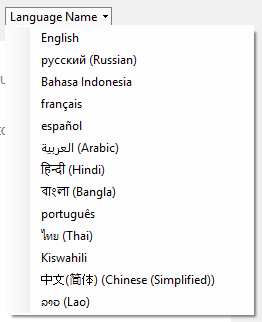 Might we be able to set up the AoR index as a Crowdin project so that we could do more official localizations of that index and have them flow into future builds of AoR?