Here’s the kb that is used by KlallamU:

Did you ever use the Auto Touch Expander on Google Chrome?
I have set up my Chrome environment to replace character combinations like this:

the tick character ( lower case of the tilde ) followed by a consonant gives a Klallam / Lushootseed character.

The tilde gives a few exceptions to that rule.

As long as I’m in some Chrome environments, I can type those in without having to switch keyboards.

My layout looks more like the LushootseedU layout than the KlallamU one, but to me it’s easier to get used to. 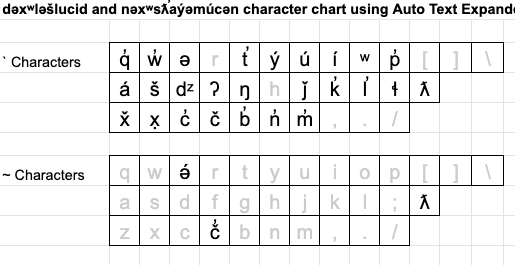 @Louis_Wilson Sorry I have been out of the country for a while…lost my computer on the plane! They found it…but it slowed me down a little.

Yes. KeymanWeb LushootseedU has it on the o key.

http://www.fontcreator.com/
Follow the link below with it you can creat ttf font
I wich that can help you
Besse7etek