Is it possible to get DAB output to display labels for common fields?

I just created an App using Dictionary App Builder 1.5. When Iook at the information in an entry, I can see the data for the common fields but I do not see any labels. For example I see this

What are you using for your import into DAB? In DAB 2.0, we added the ability import XHTML from FLEx. Here is a blurb from the release notes (https://software.sil.org/dictionaryappbuilder/release-notes/):

I was importing a LIFT file that I had exported out of FLEx 3.8. I’ll
try the XHTML option. 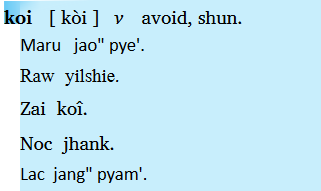 You are seeing the lexeme form, followed by the English Gloss. In addition to English, this project has 5 other analysis langauges. Each Analysis language appears, with an abbreviation for the language name, followed by that language’s gloss.

In the app I see this

The english gloss is on it’s own line…which is probably a configuration error on my part…but the other glosses are jumbled together on one line and do not have the abbreviation.