The website lists a version of IPA Help designated 2.1 and dated December 2011.
However, I have a version I downloaded in January 2008 which also claims to be 2.1.
The files on the current webpage, “ReadMe” and “Setup” are almost the same, except for the sections “Technical support” in the ReadMe and “Upgrading from an older version” in the Setup.
Moreover, the version of SetupIPAHelp.rtf I downoladed in 2008 has the identical text to the newer version, except that the final sentence, “If symbols still display incorrectly, restart the computer.” is missing.
All of these documents refer only to changes since the 2005 version 2.04. What has changed between 2008 and 2011? Is there a version history? Are there any release notes?

I don’t really know anything about the history of version 2, but the web version found at IPA Help [Home Page] claims to be version 3.0. And that’s the version that we used to produce a companion French web site found at Aide API [Accueil]. (The English and French sites also point to each other in the menu across the top.)

Thanks for responding, but I 'm confused.!

There are menus across the top on this web version: Vowels, Consonants, Diacritics, etc. So for example, if you click on the Vowels menu, you see the typical vowel chart with IPA symbols: 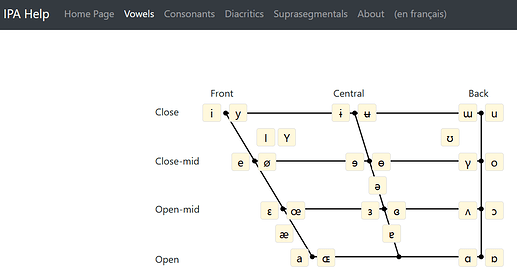 and if you click on a symbol it will play the sound.

Of course this does require an Internet connection, so it’s not the portable version you were hoping for. The site itself, including all of the sounds (both English and French versions) isn’t very large - about 5Mb. It would be possible to include a site download option, so you could have the folder locally, but I wouldn’t be the person who could authorize that means of distribution. Anyone know who that might be?

I originally built the HTML5 style website to be portable. The LSDev team should be able to package and make a download of the website available. The project is also available in GitHub if people need to maintain or expand the tool.

Thanks for all the answers. I have meanwhile installed version 2.1 and it seems to work fine. Unless there are important changes between v2.1 and v3.0, it may not be worth the effort of (re-)packaging a stand-alone application.