Converting a document from a word processor to Bloom involves creating each page in Bloom, then pasting text & images onto it. It may also involve customizing the page with text and image blocks, either in a page-by-page way, or by creating template pages using the “Template Starter” template, and then using those over and over. If you can come up with a spot to put all the material, this process can be done quickly.

However there are differences between word processors (like Word) and page layout programs (Publisher, InDesign, Bloom) which may require modifying the layout of the document. More difficult still are current limitations in Bloom that you wouldn’t face in Publisher or InDesign. Finally, since most Bloom documents exist to be translated into other languages, there are some issues that you need to consider to make sure translators are successful. To help you through this process, we have prepared the following list of the issues you might encounter.

Note that often you should consider whether it would be appropriate to simplify the layout of your book.

Note that currently when you paste, Bloom will copy some formatting from Microsoft Word (bold, italic, superscript, underline) but only if those styles were applied directly, e.g. by selecting a word and bolding it. If instead a format change comes in as part of a user-created style in MS Word, Bloom doesn’t see it at all.

Bloom is *page based (*like InDesign & Publisher) rather than flow based, like word processors (e.g. MS Word). But unlike more advanced page-layout programs, Bloom does not yet have the ability to auto-flow material between blocks (be they columns on the same page or on different pages).

For each page in the Bloom book, add the page, copy a portion of text out of the word processor, then paste into Bloom.

Languages take different amounts of space, when translated. If you fill a page with English, when the page is translated, the material is not going to fit. So when breaking content up into pages, leave sufficient space for text expansion.

Create a text box to hold the text that appears before the image.

Create a text box to hold the text that appears to the left or right of the image.

Beside it, create an image box.

Create a text box to hold the text that appears after the image. 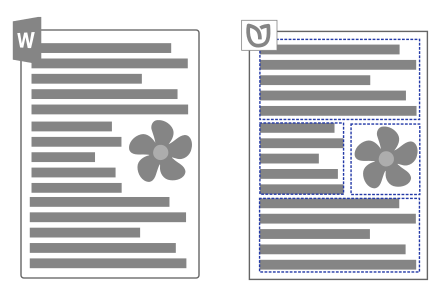 Bloom does not yet have a built-in capability to add bullet points or auto-numbering.

You can paste in the number and Bulleted text, but when translated, the translators will have to type in something to duplicate them.

Bloom has styles for headings, but a text box can have only one named style, one font, one size. A subset of text within a box can be bolded, however.

Create a text box to hold the heading.

Set the style of that box to one of the Heading styles.

Create a text box underneath to hold the text that comes after the headings.

Paste in the source material for each box.

Bloom does not have a horizontal rule capability.

You can use dashes, but translators will have to type them in too. Alternatively, you can insert an image containing a horizontal rule.

Bloom does not have a footnote capability.

You can add a text box at the bottom of the page and put the footnotes there.