Hotkeys don’t work to switch to SIL Hebrew 1.7. I can assign them, but they have no effect. (They worked in previous versions.)

As a test, I assigned each of those same combinations to my SIL IPA keyboard, and they all worked. (Makes me think it’s not a key combination conflict.)

@Barry, if this is happening only with SIL Hebrew 1.7, it sounds like more of an issue with the registration of that keyboard. Can you check a couple of other things:

@Marc, yes, I can select SIL Hebrew through either the Keyman menu or the Windows language switch menu.

I’ve generated a System Diagnostic Report, and will send it now.

Barry, I’ve put this onto my list for deeper investigation next week because I’m not understanding what’s going wrong – there’s something that’s not right, for sure.

I was assigning the hotkey to the wrong keyboard. Well, sort of.

There was an old Ancient Hebrew (hbo-Hebr-IL) keyboard, which I had removed, still listed in the Configuration > Hotkeys dialog. That is, I had removed that keyboard, but its listing stayed there in the Hotkeys dialog. And, when that dialog opens, it expands just far enough for me to see the old listing. (First screenshot, attached.)

When I expand the dialog screen, (second screenshot), 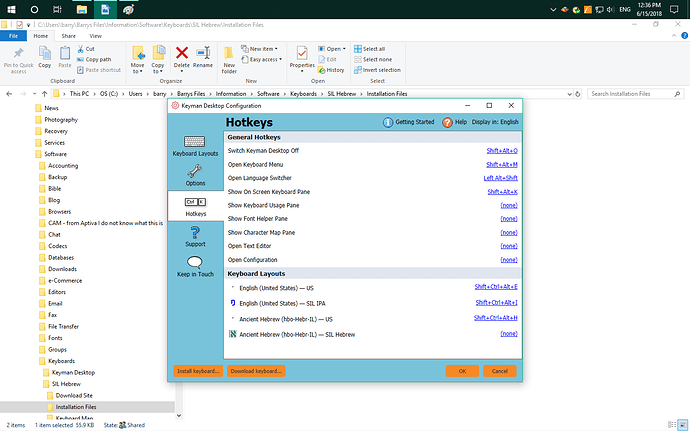 Configuration, Hotkeys, 2.png1440×900 91.6 KB
and assign a hotkey to the actual current installation of the keyboard, the hotkey works. (Third screenshot.) 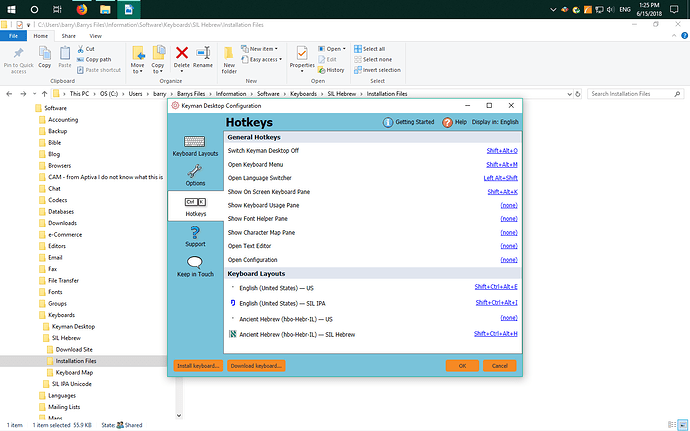 So, my bad, and I apologize for taking your time.

By-the-way, I have uninstalled the desktop and all keyboards, and reinstalled them, and that old listing is still there. Any way to remove it?

Thanks for the follow-up. That old keyboard is a Windows system keyboard; you should be able to remove it from Windows “Language preferences”.

Thanks for the pointer. I went into Word > File tab > Options > Language, and it was there under Choose Editing Languages. I selected it and clicked Remove. So, Office doesn’t show it anymore.

However, Keyman Desktop 10.0.1108.0 still does. It doesn’t show in Keyman when I first install the Desktop and before I install any languages, 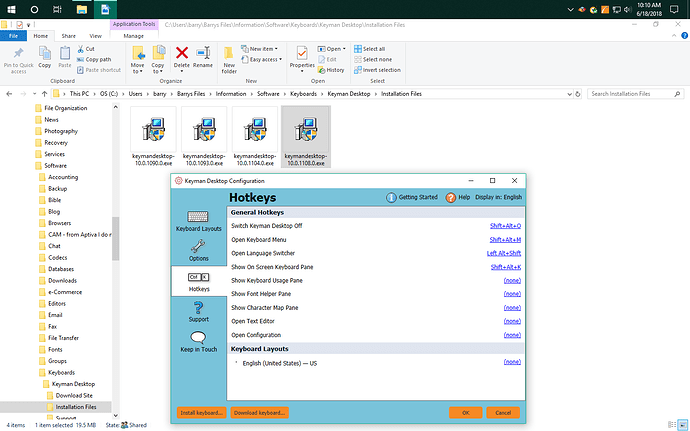 But, after I install sil-hebrew.kmp 1.7, it shows up along with the real SIL Hebrew keyboard, 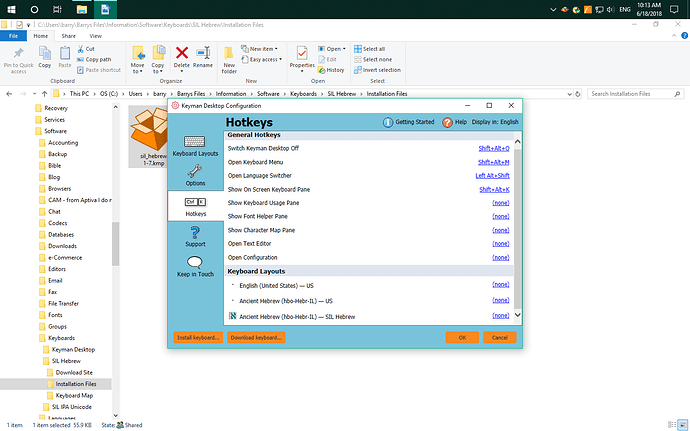 I can live with this, now that I know to watch to which entry I assign my hotkey. But, it would be nice to have the false entry out of there.

@Marc, I removed the Ancient Hebrew (hbo-Hebr-IL) entry from Windows’ “Region & language”. That took it out of the Keyman Desktop > Configuration > Hotkeys screen.

But, after I rebooted, the Hotkeys screen showed a “Unknown Local (qaa-Latn-001) - SIL Hebrew” keyboard. (So did Windows’ Region & language.)

Both SIL Hebrew and Private use (qaa-Latn) were gone from everywhere; so, I reinstalled SIL Hebrew 1.7. Now, 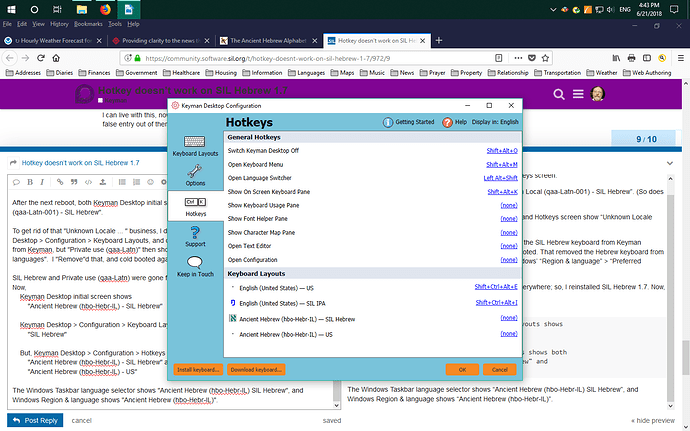 If I’ve made a mistake, and you see what it was, I want to fix it. But, if this is a bug, I’m okay with leaving it this way, in hopes that someday you’ll see something that will trigger your recognition of what the problem is, and be able to fix it. I know how to assign a hotkey to the real Hebrew keyboard now; and I value your time.

By-the-way, the SIL Hebrew keyboard is listed differently than the SIL IPA keyboard in Keyman’s initial screen. Does that indicate anything pertinent here? 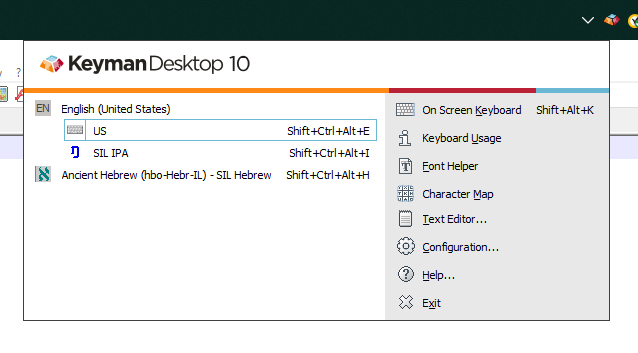 Thanks, Steve, for the explanation. So, the Hebrew keyboard - language association doesn’t have anything to do with this problem.