Today I did a demonstration: Our team is making reading apps and I wanted to show them the steps in Google Play Console to prepare and publish an app on Google Play.

We got all the way to the last-but-one step: Then this error message:

Your app has an apk that requests the following permission(s): android.permission.READ_PHONE_STATE.
Apps using these permissions in an APK are required to have a privacy policy set.

So we could not launch the app.

I can report that “we are the good guys”. We totally respect our app users. We are turning off all “tracking and spying options” in the app builder. We did a quick check and cannot find any GUI-exposed access to android.permission.READ_PHONE_STATE so we conclude that this is some internal configuration which we do not control. (correct?)

All this is no problem. But none of us is a lawyer (cannot not even spell that). None of us did volunteer to go to prison for our literacy efforts. None of us has a budget to get sued over some privacy technicality.

Here are the actual questions:

Did some initial reading: Turns out that we need to declare “what the apps does or not does”. Since we are using an App Builder, we do not even know that information. So I request that the App Builder team will read up on the new Google Play requirements and will release the needed information both to show up inside the app (this is either an existing or upcoming requirement) and a text that App Builder users who create apps and publish them on Google Play can use as their privacy policy.

Note to self: I just found this help page by Google and want to keep the URL:

It is giving help how and where we can publish our privacy policy, once we got it written up (or hopefully copied).

Here is another one:

What version were you building with? 5.4 is out, though I thought this was fixed in 5.3.

Thank you Ian for the nod towards version 5.3. I have passed your question to my team and we shall see what they were using and whether they will now take the courage to update.

I had a look at the release notes and found this:

The READ_PHONE_STATE permission should not included when building the app (unless you are using one of the restricted user security modes).

This is unclear English to me. Maybe it means to say something like this(?):

Does my team need to do anything, like check the App Builder Settings, once they have installed version 5.3? Or does the new version automatically take care of the PHONE_STATE problem?

The note in brackets is entirely unclear to me, sorry:

unless you are using one of the restricted user security modes

Who would be the “you” in that sentence? The person who is using App Builder to generate apps? The end user of an app? Where or how can either of those persons turn on or off “restricted user security modes”? Is this documented somewhere please?

I will give some more feedback, as a not-user of Reading App Builder, but trying to help my team and hopefully not frustrate the developers:

The choice of interface languages in Settings > Interface should just be English, French and Spanish.

We got very very small download and install numbers from Google Play, but making apps and sharing with friends and family is giving joy and pride and competences to our team. And even just having such apps is making our literacy project so much more interesting and repected. We believe that most users install the reading apps, read the documents once or twice and then uninstall to make space for other apps.

Keep up the good work. The fact that I am nagging and asking means that we have a new team of four young local people who are making apps and who are learning to keep making more and more and their own.

Let me reply one bit at a time.

The READ_PHONE_STATE permission should not included when building the app (unless you are using one of the restricted user security modes).

This is accurate. The restricted user security modes are used for testing in a defined group. It is to stop it spreading before it is ready for public distribution. See highlighted options below. 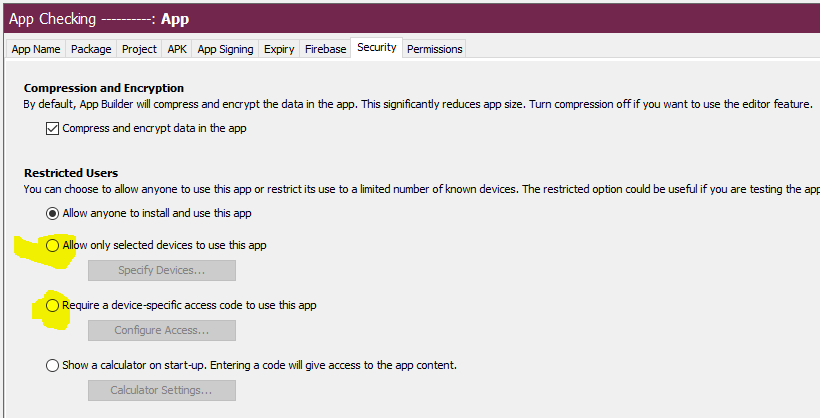 Does my team need to do anything, like check the App Builder Settings, once they have installed version 5.3? Or does the new version automatically take care of the PHONE_STATE problem?

Only if they are using those settings as the app builder. I am guessing they are not using them.

I will give some more feedback, as a not-user of Reading App Builder, but trying to help my team and hopefully not frustrate the developers:

Yes the official release notes are not out yet. If you look at the top of the list I have pinned what I believe will be the release notes for 5.4. I am not the developer but have extrapolated from the SAB release notes.

The choice of interface languages in Settings > Interface should just be English, French and Spanish.

This one does seem odd, and I will check on it. It does not seem accurate since all the lists have many more than that.

We got very very small download and install numbers from Google Play, but making apps and sharing with friends and family is giving joy and pride and competences to our team.

Social media advertising can be free or low cost to get the app to more people. Unfortunately limited space will cause many uninstalls.

Ok, thank you for the screenshot, now I get the language.

I am “just the guy in charge of all our IT”, not involved with all the app building. (But hoping to finally bring our data out in May as a dicco app… And trying to be the link between SIL and progress and our users and reality). I will share your answers with the colleague who is training the language-speakers in all things app building.

I was just sharing. We do not even want to boost numbers by “artificial” means. We are confident that numbers will slowly go up. Was just saying that we are “real users” of the App Builders. With new apps in the pipeline. And as our trainees are being weaned, there should be more output each year.

We are making eggs!! That settles the chicken/egg question for this language: Plenty reading materials first (from our lab). That will attract readers slowly. That will eventually generate authors and more literature…

[I have used slowly twice; well that fits our context. As a bonus, we get real slow food too, most of the week. We love that.]

Martin, you may already be well-aware of this, but just in case…

Regarding [boosting] numbers by artificial means, do not discount the use of digital advertising, which could include the use of app-based ads, social media, Google, free VPN, etc. (which method is right varies by context). All of these have proven effective, particularly with in generating Bible downloads. When the ads are well thought out, rather than artificial boosting of numbers, you can actually make your app(s) known to those most likely to be interested. This is best done as part of a broader strategy that allows for followup, or better yet a “media-to-movements” approach. You may not have the time/energy/talent for that, but perhaps there are others around you who could come together to pursue something like this.