Many times, the Keyman app for Android likes to “crash” and revert back to EuroLatin, the default keyboard. I have been waiting to get a screenshot of it before reporting. Here is the screen some minutes ago: 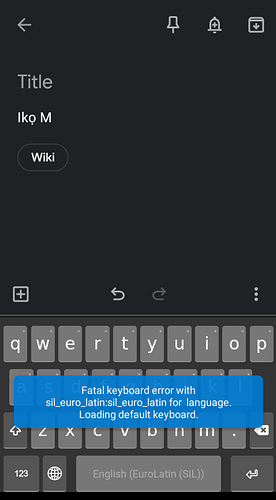 If you wish to debug this yourself a little, you can do this by following the steps at The more I type, the slower the prediction/speed - #15 by Marc to setup Chrome remote debugging, and the debug console should show the error which is triggering the keyboard reload (you may need to select ‘preserve log’ in the console to avoid errors from disappearing).

I think this will be difficult to track since one can’t predict when it will occur, and the toast message disappears after few seconds.

The crash has been reported to us. I have been able to track crash reports that match the scenario you are describing, so we can investigate further from here.

Could you please expound on this somewhat? Did this occur as the keyboard popped up, before pressing any keys, or had you pressed a key before the error occurred?

Could you please expound on this

I wanted to type “Ikọ Mêkọtbe Ifit” ( = Words that Can be Played, or = Acceptable Words for Play) and then type the other part of the article. But after the first M in the second word, the keyboard crashed and reverted to EuroLatin. It actually threw two toast messages in quick succession, the first message mentioned the name of the keyboard (Obolo Chwerty) twice; while the second message (in the screenshot) mentions EuroLatin twice. I couldn’t capture the first because it happened unexpectedly, and lasted for only about 3 or so seconds.

It can happen at different times like when the keyboard just starts up or while typing. I can’t predict when it will happen; it’s always unexpected. It also affects the keyboard I built with KAB.

We believe that we’ve identified the main cause of this; we’ll just need a bit of time to vet our potential fix and ensure it doesn’t cause other problems first.

The work item is up as fix(common/core/web): error from early fat-finger termination due to OS interruptions by jahorton · Pull Request #5479 · keymanapp/keyman · GitHub, which targets our 15.0 work. Once that’s accepted and we’ve confirmed it works well, we’ll bring the fix to 14.0.

Well done. I’ve been plagued by that too yet it cropped up so randomly (and especially perhaps when memory was short?) that I couldn’t figure out a proper error report.

@rowbory You are welcome. Nice to know that someone else has been experiencing the same issue. It has happened many times but I’ve been waiting for when I can capture the screen because in this kind of report, a picture is worth a thousand words.

@makara
Did you say this issue has been resolved? Which version please?

Per GitHub comment on the PR in question, the fix was made in 15.0.89 alpha. You can get the .apk file and test it out. Let us know if the problem persists.

@joshua_horton Has the fix made its way to the stable 14.0 yet?

The port to stable (cherry-picked as fix(common/core/web): error from early fat-finger termination due to OS interruptions 🍒 by jahorton · Pull Req) landed in 14.0.280, dated August 2.