DBA duplicate dictionary created I can't get rid of

Can anyone tell me why two Bakwé dictionaries are showing up when I only want one? The second one has only 7 entries in it, and looks like it is using reversal entries except for the first entry at the top. Here is a screen shot of the LIFT export tile where the first entry shows up. 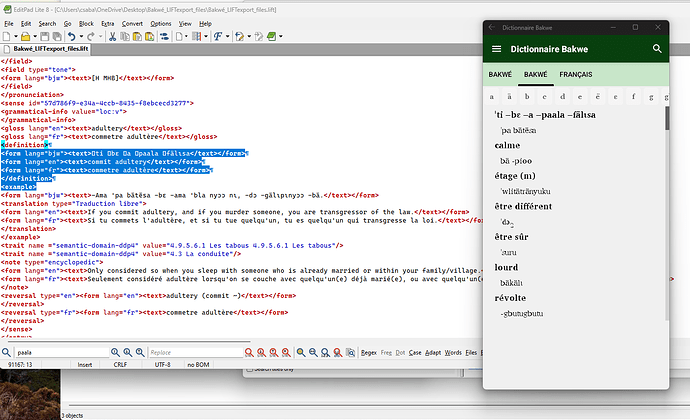 In my FLEX database I cannot find the words 'ti ‑bɛ ‑a ‑paala ‑fälɩsa (the initial apostrophe and initial hyphens are outdated characters for initial tone on the first syllable).

Any help would be appreciated.

In a testproject of mine I have the same issue. Only two words are shown in DAB, the entry of the respective words in my FLEX database are almost entirely empty, but the preview on the top right shows a complete entry with part of speech etc.

My guess is that I might have imported this entry from somewhere else at some point in time, it is even written in another language.

As long as nobody else is suggesting a more elegant way, I am rather optimistic you could just create new entries in FLEX, manually copy the information from the old entries to the new ones, delete the old ones and it should be working.

It is making a reversal since one of the Definition languages is the same as the vernacular headword language. In theory you should be able to turn that off, do you see this in the Language Details tab for the Bakwe language?

If so turn it off.

If not then please share your LIFT file. I’ll experiment and send back a version that won’t show the second language.

Ok, I tried unchecking that box. I still want Bakwé and Français (for the reversal), but not the second Bakwé tab that keeps showing up with only seven items.

Here is the lift file link below.

Thank you for the help,

Only 7 out of 4000+ have a definition or gloss with the matching ISO code.

I understand now. Thank you for the help!

This will probably work, since “bjw-al” is a different tag, however, that tag would be interpreted as “Bakwé as used in Albania”, which might be misleading.

It might be better to use a private use tag (-x- followed by your tag) to make the distinction, so “bjw-x-al” or “bjw-x-analysis” for example.

Another possibility to experiment with would be using “bjw-CI”, however “bjw” and “bjw-CI” are considered equivalent, so that it’s possible that “bjw-CI” would be interpreted as “bjw” and thus wouldn’t give you the difference you need.

Thanks @drowe you are right. What I proposed was a quick fix that is not technically correct. To my knowledge DAB does not parse language code extensions except for audio in the rendering. Currently all different language strings are considered different languages by DAB.

I have written this up as a bug report/feature request since you can’t turn off that tab.