I’ve created a Keyman mobile keyboard. One of the character combinations is č̓. The č is entered from a pop up menu when c is held then the glottal ̓ is added from the pop up punctuation menu. Sometimes it is rendered correctly and sometimes it is rendered as c̓ ̌ . We haven’t pinned down a particular set of circumstances that cause the problem yet and I haven’t seen this problem on Android but the user who reported it says that it happens in both Facebook Messenger and her texting app. I haven’t had her check other applications yet. The characters are ‘c’, combining caron (U+030C), and combining comma above (U+0313). 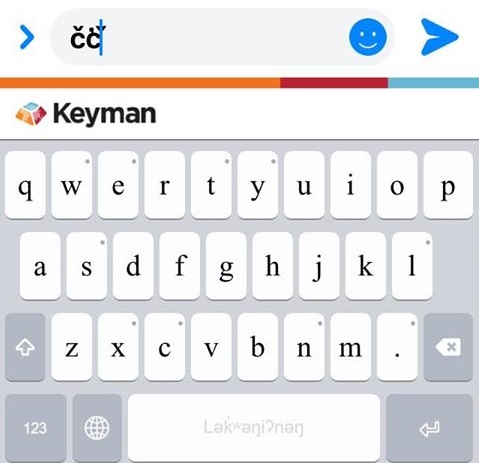 I suspect it depends on the fonts that are on the person’s OS or application whether it displays properly. It must also be doing some kind of normalization if you are getting c̓ ̌ instead of how you entered it č̓ (U+0063 U+030C U+0313). You might consider outputting U+010D U+0313 (where the c+hachek is precomposed) instead and see if that handles it better. (The uppercase would be U+010C U+0313.)

Sometimes it displays correctly and sometimes it doesn’t and we haven’t been able to characterize the failure case yet. I don’t have an iPhone but I’ll have the opportunity to test over the next several days and hopefully I can narrow down the failure case.

I do think it’s font related. Different devices have different fonts on them with different levels of character support.

Thanks for your help Lorna. It did turn out to be a font issue. Sorry it took so long. It dropped off my radar. Anyway it displays correctly in other apps that are clearly using a different font and displays correctly on the receiving phone so I think we just have to live with it unless we change are rules around composing characters.