H all,
I just had a user signal to me that there is a problem with my Cameroon keyboard, but it only seems to exist in Keyman Android 15 (My custom Android app uses an older version of KMEA, so I hadn’t noticed).
The bug DOES NOT appear in the web-based debugger of Keyman Developer 16.0.88a or on older versions of KM Android

I don’t have an iPhone handy to test.
I guess it is an unintended regression as a consequence of the addition of CAPS to Android, as I can’t see a conflict in my code.

On the keymanweb.com site with the mobile viewport (F12)

I clicked on the layer button and the ɗ key and it also outputs upper-case ɗ. It seems every key on that symbol layer is getting upper-cased.

Maybe KeymanWeb is enforcing the current layer with a rule…

So things work on older versions of Keyman Android, work on Keyman Developer, but do not work on KM Android 15 or websites based on 15. Yes, it mases sense that the problem is Web, and something recent.

I look forward to your diagnosis.

I looked through the other keyboards to find another that was malfunctioning in the same way.

Among the keyboards I could find, it seems to be rare to be using this combination:

In other words, my keyboards seem to be the only ones malfunctioning in this way.

I dug into this issue this morning. I do like to try and prioritise regressions, and this is a beautifully clear regression – unlike some of our thorny issues!

Thanks @darcy for your rapid repro as well

I reproduced this in the latest 16.0 alpha, so not sure why it didn’t come up for you?

It turns out that the issue is the use of nocaps in the layer id is triggering a substring match for "caps" in keyboardProcessor.ts:getStateFromLayer():

Prior to Keyman 15, we did not support Caps on touch layouts, so this never arose. Yes, your keyboards are the only ones that use nocaps in their layer ids in the keyboard repo!

There are three places we could fix this:

Given this problem is isolated to two keyboards, my preference is for you to implement #2, and me to work on #3, immediately, and approach #4 as a future improvement.

I was getting ready to implement #2, but I didn’t see “nocaps” or “caps” in my touch layer names (or anywhere in either keyboard). 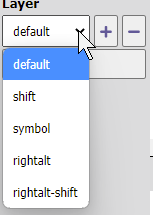 I had removed all the nocaps from my local copy in May 2021, but apparently I didn’t upload the touch changes. I’ll work on finalizing and committing what I have, which will take a while as several changes were made to the version on keymanapp/keyman, and a few need to be modified and tested. I need to remove some NCAPs that were added and I’ll need to keep two separate copies of my KPS and KPJ if the online version uses
\shared\fonts\sil\andika_subsets\AndikaAfr-R.ttf because my Android app doesn’t have that folder.

I had a few false starts with the Pull Requests, but it’s ready now. I’ve bumped them both to 6.0.8 to avoid my own confusion.

Updates to Cameroon Qwerty and Azerty

Fixing my part of https://community.software.sil.org/t/bug-introduced-in-cameroo…n-keyboard-by-km-15-web-android/6834/5 Reverting "Latn" addition for languages where Canonical is Latn. Switching to &CasedKeys instead of NCAPS/CAPS Switching both keyboards to fonts from the Repo

Since I’m trying to keep the keyboards synchronized, it’s MUCH easier for me to submit updates to both keyboards at the same time.

Thank you @Matthew_Lee! I see the changes have already been merged

And the user now has a working keyboard. Light-speed turnaround!