Here is a request from the illustrator/designer on our team:

Allow to chose a background image for each page. 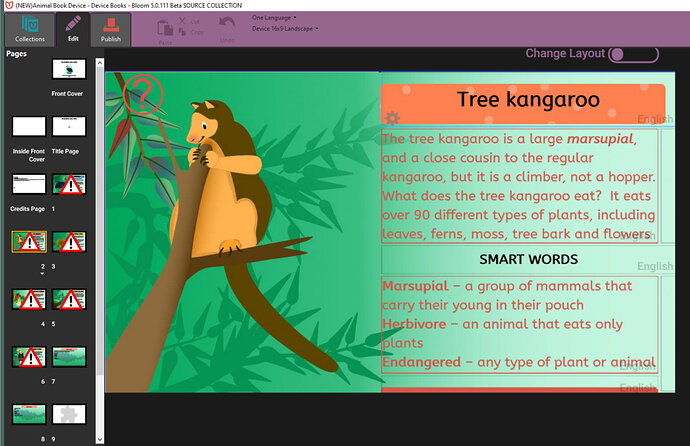 On behalf of the Education for Life team
Koen
www.mytalkingbooks.org

Koen thanks for posting that.

Please try out the Experimental Full Screen Template and send us your feedback issues@bloomlibrary.org. It’s a bit ugly to work with.

Also, as you know, this can also be done by starting with any of the “Comic Book” template pages and then putting text on top. You mention scrolling… if that is not working with simple text overlays on comics, I expect we can fix that. Shoot us a report at issues@bloomlibrary.org.

The Experimental Full Screen Template is indeed a bit hard to work with.

Here’s a link to a video of me adding a background image with the Experimental Full Screen template and later trying to do the same with css.

Bloom Training
As you know, our team is focused on Bloom training, and the more things in Bloom are intuitive the better. We would like to see a way of adding a background image via a menu, similar to the Comic Tool. In that tool you would simply browse for a background image and done.

I think that a lot of teams would really appreciate this feature.

Text over picture and other overlay elements now scroll if there is more text than will fit.

Just revisiting this one…

This request is for a true background image capability of normal pages.

Instead, what we have for now is:

Maybe we can discuss the listed “Downsides”:

I don’t understand this “Downside”. The issue itself is asking for a single Background image.

It’s experimental (and thus not built in) so that we can get feedback. Listing that status as a “downside” confuses the issue, I think?

OK, let’s improve that. @Koen can you make a suggestion?