Hi all,
I watched the recent workshop videos with interest, and I’ve been tweaking the mobile versions of the Cameroon keyboard with CSS.

I have created a custom gradient “deadkey” style with the following code: 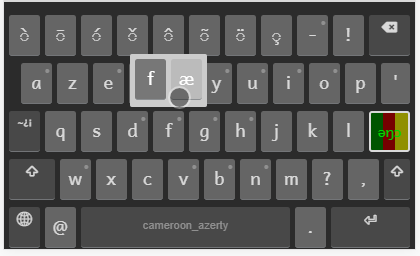 Challenges:
Now I’m trying to remove the base character from the longpress popup to reduce the choices (often down to one). When I longpress “e”, i want to see “ə”, but not “e” (many other keyboard apps work this way). I figured that I would be able to call :first-of-type or :first-child in CSS, and mark it as invisible but the code that generates the keyboard elements is rather black-box.

1a) How can I select (and hide) the duplicate first key in the popup.
1b) If this is not currently possible, can this feature be added?

As Marten suggested in the workshop, I want to try highlighting vowels with a slightly different color, but:
1a) I’m already using the deadkey style, so I’ve run out of unused styles.
1b) I can’t seem to select a specific key in CSS, I was hoping to be able use #K_E, as this is the identifier of the key. Is it possible to do this yet?

The custom CSS ‘feature’ (or wart) is a big hammer that can easily create problems for you and us in the future … yes, I’m really going to try here to dissuade you from taking this path! The intent of the CSS was really to allow differentiation of specific keys, probably with colour and/or font styling. But CSS allows a whole bunch of other things of course.

In particular, the customisation of the longpress behaviour and styling raises a bunch of problems:

In other words, if you’d like to change the behaviour of the touch layout in the ways that you are attempting, it’d be much better to look at how we can implement these features in the apps themselves. We’d welcome suggestions in this forum or in the GitHub issue database. We are a small team – currently only 4 developers stretched across 6 platforms, so please understand that we cannot respond and implement suggestions as quickly as we want to.

Now, updating the styling is a dot point in our road map for version 11.0. Ideally, I would like to stop everyone from using the CSS misfeature until we have cleaned up the core CSS and removed a stack of legacy from it – and then define clear guidelines on how it should be used in a keyboard: the attributes supported and the selectors (layout and behavioural changes will never be supported in the CSS).

Huh, and now that I’ve posted my reply it seems you’ve edited out part of your post which means the picture is missing context? So not quite sure now what I was responding to

Just after posting, I realized that “there be dragons” in Keyman’s CSS and removed the box resizing code. (It only seemed to work in the Chrome previews, not on the device) That’s what you mostly responded to…sorry.

You say: “The intent of the CSS was really to allow differentiation of specific keys, probably with colour and/or font styling.” So, is it already possible to style a specific key without restyling the whole class, or will that be a later feature? I really expected to be able to “Grab” the key with #K_E .

So, the option to remove the “base” key would need to be coded into Keyman and is not an after-market hack. That’s fine. It looks like the behaviour is defined here on line 600.

I’m wrapping the keyboard in an Android app and targeting android 5.0 and later for this keyboard, as some of the characters usually don’t work in 4.4. Even so, I believe I have a fallback color in case the gradient fails…I will test that.

Thanks @Matthew_Lee for spotting the dragons

The key id is #layer-id, e.g. #default-K_E. Ideally you’ll prefix that with the name of your keyboard “foo” as well: 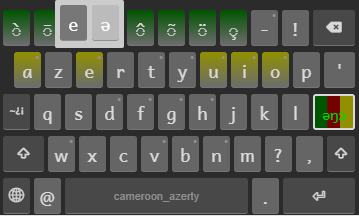 keyboard_cameroon_azerty is the one that works in Keymanweb. Since Windows is less sensitive about caps than Android, Is this a capitalization normalization issue that doesn’t pass the keyboard id to KM native?

Regarding the capitalisation, I don’t think that’s relevant to the issue. Capitalisation in JavaScript is identical in Windows and Android; it’s only in the filesystem that things differ. The capitalisation you are seeing is actually the name of the object constructor function which follows JavaScript naming principles of title-casing for objects (e.g. Window).