Hello. I have a specially made set of letters that have been made into a computer font and set all within ASCII space see www.reacross.org I myself am not a fluent programmer but given advice I can get someone to make necessary changes. How can one 1) shift the letters to a free space in unicode and 2) make a keyboard for all the main computer systems so the letters can be typed…the letter set is just one letter shape followed by another shape…nothing like is required for Khmer language for example…works like English but with different letter shapes you can say.
Thank you

Is that link correct? I can’t reach it.

The “Free space” in Unicode is called the Private Use area. After verifying the font license grants you permission to modify the font – and this is not a given – there are utilities that can re-encode the letters to the Private Use area, though it may take some understanding of the structure of TTF files. Specifically you want to find a tool that can rewrite the cmap table within the font. The cmap is the mapping between Unicode code points and glyphs (the letter shapes).

btw, welcome to the community!

I’m assuming by “computer font” you mean OpenType (usually .ttf extension). There are other font formats, which might require different tools.

A well-supported set of command-line tools for TTF files is a python package called fontTools. Among its utilities is ttx that can dump some or all of a TTF file into readable XML which can then be modified and compiled back into the font. You could use this to dump just the cmap table, edit, and recompile it back to create your new font.

OK thanks. Yes it is a TTF font. The link should be www.readcross.org . The font is custom made so should be no problem with the permission. Which software can change the cmp table? I am familiar with the private use area. 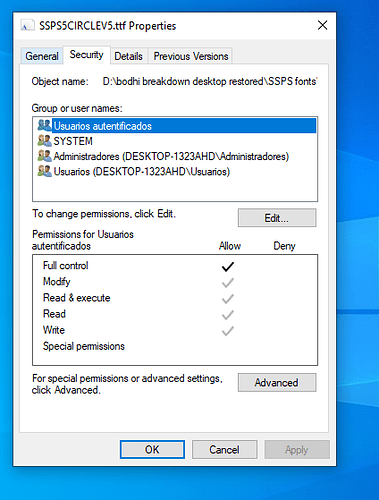 The font is custom made so should be no problem with the permission.

What I meant by permission was not Windows file permissions, but whether the license agreement by which you are using the font gives you permission to make changes to that font. Generally speaking, fonts are intellectual property just like other computer software, and your use of them is governed by a license agreement of some sort.

For example, if you were to find the ttf file on your Windows machine that holds the Times New Roman font, the Windows file permissions would indicate you have full permission – meaning the operating system won’t prevent you from writing to that file. But the Microsoft Windows End User License Agreement (EULA) says you may not modify the fonts that are supplied with Windows, i.e., it is not legal for you to modify them.

I do not know how the font in question is licensed and am not in a position to evaluate whether you have legal rights to modify it. I just want you to make sure you do.

Which software can change the cmp table? I am familiar with the private use area.

See information about ttx in my previous reply.

Thanks Bob. Yes I have full rights to the font and letter shapes. The letter shapes are my invention and the various TTF fonts made so far from the letter set were programmed by another person from my specifications. The letters are part of a discontinued software patent that was applicabe only in New Zealland. I’m going to see what I can do with Python computer language and the font tools link you sent. I have read that SIL has gone through the process of setting letter sets previously within ASCII space into undefined areas on Unicode. I wonder how decisions are made in chosing which area within that to use.

We had a Private Use Area (PUA) committee that assigned codepoints to characters. We only accepted characters that we believed should be added to Unicode and then we actively pursued getting those PUA characters into Unicode. There are a few characters that haven’t made it into Unicode, but the vast majority did.

The home page for our PUA is here: SIL’s Private Use Area (PUA)

You can see on this page how we divided up the official part of Unicode’s PUA:
https://scripts.sil.org/SILPUAassignments

On this page you can see how Industry has used the PUA: Use of the Unicode Private Use Areas by Others

At this point we would focus on proposing a character to Unicode rather than adding it to the PUA. Unicode releases yearly and our font cycles haven’t been that often. Having people begin using a PUA codepoint and then trying to encourage them to switch to official Unicode codepoints has proven to be problematic. Nowadays our fonts almost “force” them to change the codepoints because we inverted the PUA character so it is white on black.